At Monday’s Democrat Town Hall, an audience member asked Hillary Clinton how she would deal with the issue of the attack in Benghazi both in the campaign going forward and as president if she’s elected. Rather than actually answer the question, the Democratic presidential front-runner — you guessed it — danced around it.

“I am well aware that for partisan political purposes this continues, but let me tell you why this makes me — it makes me sad. It makes me sad because we’ve had, we’ve had terrorist attacks many times before in our country,” she said before waxing reminiscent. “When Ronald Reagan was president in 1983, our Marine barracks, our embassy were attacked in Beirut. More than 250 Americans were killed. The Democrats didn’t make that a partisan issue."

"We were horrified. We were heartsick that Americans doing the work they were sent to do, civilians and military, were murdered by terrorists. So, the Democratic congress worked with the Republican president to say what can we do? How do we fix this?” 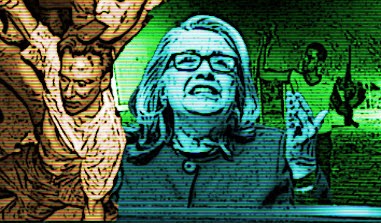 “As Commander in Chief, President Ronald Reagan took responsibility for the loss of the lives of those under his command, comforted their families, and coordinated a response, said “Secretary Hillary Clinton, who had responsibility for the security of our ambassador and his staff, failed to protect them despite warnings, propagated a bogus excuse of an anti- Muslim YouTube video, and when called before Congress said ‘What difference does it make?’ Hillary’s claim that Democrats did not politicize Beirut is completely false, as they did so at least three times.”

Craig Shirley added Hillary Clinton is not correct when she claims Democrats didn’t make “a partisan issue” out of Beirut bombings. Walter Mondale made it a campaign issue claiming in 1984 “The President is clearly to blame - let me put it this way - clearly responsible, for overall policy and direction” and that ''it is abundantly clear that protection of our embassy was clearly inadequate.”

House Speaker Thomas P. (Tip) O'Neill Jr. (D-Mass.) told the media that Reagan "is getting tangled up in his own excuses. For the third time in less than a week he has offered a lame excuse" for the Beirut bombing.

Sen. Patrick Leahy, D-Vt., a member of the Intelligence Committee, called Reagan’s reaction to Beirut "outrageous and beneath the dignity of the office of president of the United States."

Geraldine A. Ferraro running on the ticket with Walter Mondale said “instead of taking responsibility, Ronald Reagan is now making excuses.”

In other words, Hillary lied. Again.

Craig Shirley is a bestselling author who has written three books about Ronald Reagan. His newest one, "Last
Act: The Final Years and Emerging Legacy of Ronald Reagan," tells the story of Reagan's final years as president and his post-presidency.

Lie. It's what she does.

This woman is a national disgrace - right along with her lying, philandering husband. What is WRONG with people who even consider voting for her? The dumbing-down of Americans with all the PC crap and people being too lazy to do their homework on candidates, is appalling. Bill and Hillary Clinton are TRAITORS and criminals. Good Lord, WAKE UP people. Hillary should be in JAIL. FOR THE REST OF HER MISERABLE LIFE.