Larwyn’s Linx: Next President Must Flush Out Administrative State 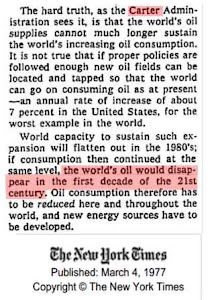 Next President Must Flush Out Administrative State: Daniel Horowitz
The Naked and the Right: The Z Man
Jeb Bush’s Donors Signal The End is Near: Erick Erickson

Just days to Al Gore’s ‘point of no return’ planetary emergency deadline: Anthony Watts
In 1977 Jimmy Carter Said We Should Have Run Out of Oil by Now: Gary DeMar
NOAA Butchers Math in Report Claiming 2015 Was Hottest Year Ever: Jeff Dunetz

In His Final Year, Obama Proves He Knows Sh** From Shinola: MOTUS
Poll Shows Just 28% Of Americans Think Their Lives Have Gotten Better Under Obama: William Teach
If Donald Trump were caught on film strangling someone, what would supporters say?: NewsMachete

Image: In 1977 Jimmy Carter Said We Should Have Run Out of Oil by Now
Today's Larwyn's Linx sponsored by: #ConstitutionMan: Ted Cruz for President

QOTD: ...the next president will immediately be confronted by the “fourth branch of government”— the administrative state...

...With Donald Trump as the front-runner, [whether he would go to war with the administrative state is a question] he needs to answer. He has recently extolled his ability to work with people and cut deals. He has decried the gridlock in Washington. The problem with that mentality is that if you are looking for efficiency instead of principle, as many businessmen are often inclined to do, the path to least resistance is to work with the administrative state instead of going to war with it. And that would render the presidency worthless, especially following Obama’s fundamental transformation of an already-imbalanced administrative state.

Trump has captured the minds of many conservatives with his promises to enforce our immigration laws and sovereignty. But if he is committed to cutting deals in order to avoid gridlock, nowhere will his agenda be rendered more worthless than in the realm of immigration enforcement." --Daniel Horowtiz

Lest we forget, Senators Ted Cruz and Rand Paul both stated that they would not campaign against sitting Republican Senators. Hence, Rand Paul and Ted Cruz did not support Matt Bevin when he ran against McConnell. Look at all the terrible things that happened with Douche Turtle McConnell back at the helm.
All these pukes are establishment. Trump, not having been elected, not casting votes and writing editorials with Paul Ryan in the WSJ supporting fast-track for TPP, supporting more H1B visas and so on, seems to me to be the candidate with the least amount of blame on him. GO TRUMP! Tear the pillars down.

Yes, Anonymous @ 7:01PM.
I too wish that Trump would disappear - or at least get a clue about humility and shut his big mouth.
He's another narcissist and Alinskyite - just like the one occupying the WH today.