Senator Ted Cruz (R-Tex.) would be wise to avoid the mistake Ronald Reagan made early in his 1976 insurgent campaign to supplant President Gerald Ford as the Republican presidential nominee. Cruz needs a crystallizing justification — a signature issue.

Reagan only found one mid-way through his 1976 race, but he was able to use it to carry him to victory in 1980. Reagan’s populist call to hold on to the Panama Canal — “We built it! We paid for it! It’s ours! And we’re gonna keep it!” — resounded with voters in 1976. Cruz has an equally populist issue that could prove as successful: campaigning against the U.S. Supreme Court’s eminent-domain ruling.

Though many Republicans loath the infamous Kelo v. City of New London decision, which allows government use of eminent domain, front-runner Donald Trump strongly supports it. Cruz is already featuring eminent domain in a new ad. But he could be doing far more. 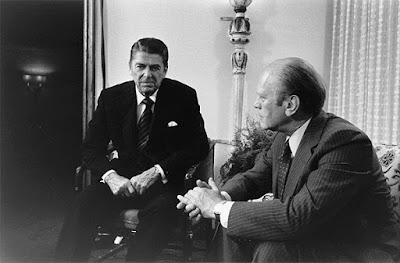 When Reagan decided to take on Ford, there was no clear rationale for his entering the race. True, Reagan, like many conservatives, was dismayed by Ford’s refusal to meet with celebrated Soviet dissident Alexandr Solzhenitsyn. Ford had refused to sit down with the Nobel Prize-winning author, who had recently been expelled from the Soviet Union. Reagan took Ford to task for knuckling under to Soviet leader Leonid Brezhnev with heated radio commentaries and newspaper columns. The Teamsters agreed with Reagan and refused to load grain onto Russian vessels heading for the Soviet Union. But this was a reason for running, not a rationale.

Reagan’s emerging conservatism had also increasingly put him at odds with the Nixon administration. But he got on well personally with the “trickster” — a fellow Californian and fellow vehement anticommunist. By the time Nixon resigned in August 1974, however, Reagan had soured on Ford. Nancy Reagan and Betty Ford could barely be in the same room. The chemistry just was not there.

By the spring of 1975, the deteriorating relationship hit rock bottom. The Ford White House aimed many insults at Reagan, both personal and ideological. Ford did not help things when he joked during the 1974 Gridiron Dinner, “Governor Reagan does not dye his hair. … He is just turning prematurely orange.”

Reagan’s campaign in the fall of 1975 and into 1976 was somewhat bumbling — unusual for the usually smooth candidate. But his campaign staff was not ready for national prime time.

Ford won New Hampshire in a stunning upset. In rapid succession, Reagan lost Florida, Massachusetts, Rhode Island and Illinois, the site of his alma mater, tiny Eureka College. Reagan was $2 million in debt, and more and more GOP power-brokers were calling for him to drop out.

However, Reagan found his resonant issue in the Florida primary. He mentioned, in passing, the “giveaway” of the Panama Canal, scheduled to be turned over to the Panamanian government in 1999.

Reagan was startled when his opposition to the Panama Canal Treaties drew such resounding applause. But a groundswell formed, and Reagan was soon leading a populist revolt. The “canal issue” became Reagan’s signature, propelling his campaign all the way to the Republican National Convention in Kansas City, Missouri. He lost the nomination by the achingly close 57 votes.

Though the two canal treaties passed the Senate by narrow margins in 1978, the political advantage went to Reagan and the disadvantage to all who supported them. As former President Jimmy Carter astutely explained to me, support for the treaties had become toxic. Virtually every senator who voted for the treaties in 1977, and who was up for re-election in 1978 and 1980, lost.

But the narrow loss in the convention — and also on the Senate floor — set the Gipper up to run in 1980.The rest was — and is — history.

The canal issue struck a deep chord with the American people at a particularly anxious time in U.S. history. The United States had lost its first war, as well as two presidents — one by assassination and the other through resignation. It appeared to be losing the Cold War to the Soviets and, with gas lines, inflation, national malaise, civic unrest, disco and leisure suits, it seemed to many that America’s day was past — 25 years ahead of schedule by the calculations of Henry Luce, who had notably labeled the 20th century “The American Century.”

Cruz now needs his own signature issue, one that will resonate with the American people.

Trump, a big real-estate developer, is adamantly in favor of the court’s Kelo decision. The ruling, many conservatives believe, upheld the conspiracy between big government and big developers to take property from private landowners on the premise that this would produce more tax revenue for government. The court, many conservatives insist, was intellectually corrupt in its decision, the developers economically corrupt in their arguments and the government morally corrupt in facilitating the illegal transfer of wealth. Yet, as Trump told Neil Cavuto of Fox News, “I happen to agree with it.”

That’s the opening for Cruz. True conservatives know that private property has been considered sacred in America since 1787, and even before. It is, in many ways, a deeply American concept. The original draft of the Declaration of Independence, for example, contained the phrase “pursuit of property” before it was changed to “pursuit of happiness.”

Kelo came during the George W. Bush era, now regarded by many conservatives as an era of “big government Republicanism” — the era of the corporatization of the GOP. Thomas Jefferson’s admonition about a republic being the only form of government not at war “with the rights of mankind” was lost on the Bushies, as far as conservatives were concerned.

Cruz should emphasize that upholding private property is the essence of the modern conservative movement’s Jeffersonian principles. He should offer a way to address this — perhaps with a constitutional amendment, to restate the sacred property rights the framers intended. Due process, under the Fifth Amendment, has been pillaged, and left for dead.

This could set Cruz up as a champion of the people against corrupt government and corrupt corporations. It would place him on the right side of the Constitution — and Trump on the wrong side. It will be tangible evidence that Cruz is pro-Reaganism. He needs to campaign on this, making it his signature.

Jefferson viewed his 1800 election as the second American Revolution — and he indeed rolled back government, including the notorious Alien and Sedition Acts. Reagan regarded his 1980 win as yet another upheaval of the people over the state.

Craig Shirley is a bestselling author who has written three books about Ronald Reagan. His newest one, "Last Act: The Final Years and Emerging Legacy of Ronald Reagan," tells the story of Reagan's final years as president and his post-presidency. Shirley's earlier books were "Rendezvous with Destiny: Ronald Reagan and the Campaign that Changed America," which detailed Reagan's 1980 campaign, and "Reagan's Revolution: The Untold Story of the Campaign That Started It All," about Reagan's failed 1976 presidential challenge to Gerald Ford. When not writing history, Craig Shirley is president of the influential government relations and marketing firm Shirley & Banister Public Affairs. He has lectured at the Reagan Library, is the Visiting Reagan Scholar at Eureka College and is a member of the Board of Governors of the Reagan Ranch.

He should champion private property rights, not just in the area of real estate, but also in the boom in civil forfeiture. When local governments count on confiscating private property without even charging the property owner with a crime in order to balance their budgets, there's something clearly wrong there. I'm sure most Americans have heard of these problems, and would welcome a lawyer proposing a real solution.

If Ted Cruz wants to win, he needs to be American. And, as the framers truly designed and meant it, he isn't. He is a no-go for me. Period. Anybody but Trump? You got your chance with Romney and blew it. No surrender on this issue again, not for me.

Well, that's your call, Doom, but when the Congressional Research Service and every other Constitutional expert of merit says the child of an American citizen born anywhere in the world is eligible, that's good enough for me.

As for policy, no one has been more consistent over his entire career about protecting the Constitution than Mr. Cruz. And the fact is, if it's not too late already, about the only chance we have of saving our republic is by defending the Constitution from further perversions.

I know what kind of SCOTUS justices Cruz will name. I can't say that about any other candidate.

Fair advice. My problem is that I don't trust "The Congressional Research Service, et. al.". I don't trust this government, or the GOP(e or otherwise). Yes, I do understand that makes for slim allies. But that IS the point. I just wished to help you understand my problem. And, no... not fully vested in Trump, just, if he can be nailed to limiting immigration, even repatriation, plus an end to anchor baby? That's the only way conservativism survives, and I don't believe Cruz is true on that. Trust? As I said, no. Fiddling while watching, reading, ignoring debates because they are bull... looking at what and who are being put where in the various campaigns. A bunch of politicians have shot themselves in the foot by campaign pics and placements. Let them feed of each other until one proves to be the lesser of the many evils.

Stopping government from forcing farmers and ranchers from selling their property in exchange for freshly printed money is the first step. The next step is to return as much land as possible into private hands, in exchange for money that must only be used to pay down the horrible amount of debt that government has accumulated.

Cruz would certainly differentiate himself from Trump on this issue, a fundamental Constitutional one.

Who cares about debt when there might well be 40 million foreigners in the land, mostly voting left, legally or elsewise? It simply doesn't matter unless you plug that hole, even return many or better all, and not just illegals if necessary. A name like Cruz doesn't offer much hope for that as far as I can tell. Even if he is a populist, if he can be nailed to immigration block and return, Trump is simply the better, only, option. A nation is it's borders. Open borders is the end of any nation.

Just imagine how different the world would be without a President Carter. If Reagan had one the nomination and the Presidency in 76, there'd be no Iranian revolution. We would live in a way different world today....

I agree with Doom (and hope that's not prophetic.)

Came back to California after 30 years abroad. Can't recognize the Golden State; it's more the Cr*p brown State now. It's all the illegals. CA DMV gives out driver's licenses to anybody now, no questions asked. Voting info comes with the licenses.

We are not allowed to ask whether someone is an illegal or not, so don't ask whether all those illegal aliens are going to vote illegally. You don't want to know.

There's only one man standing who wants to stop the madness and stop the immigration, and I'm with Donald J. Trump!

Doom says debt doesn't matter unless we rid the land of illegals. Seems to me that our debt problems started well before the illegal problem. And the same yahoos who spend money like its free are the people who have declared our borders open.

But we can't resolve these problems with a population that has no knowledge of our history, laws, or institutions. And all too much of this ignorance is on display in our election process.