The, eh, more passionate Trump supporters are alive and well and living in the comments section of this blog, buzzing with conspiracy theories and stories of Cruz's changes in policy positions. That's fine. As I've said countless times before, I would support Donald Trump in the general against a Democrat, because I'd support Dennis Rodman or Porky Pig against a Democrat.

With that said, any policy position Ted Cruz has ever altered pales in comparison with Mr. Trump's earlier support of assault weapons bans, extended waiting periods to purchase firearms, partial-birth abortions, and gay marriage. Trump's acolytes insist that the year 2000 was a very long time ago. So let's ignore the fact that Trump endorsed an open Communist -- Bill DeBlasio -- for mayor of New York in 2013, stating that he's a "smart guy" who will be "a good mayor". No, let's skip that point for the moment.

Instead, let's reflect upon Mr. Trump's more recent willingness to openly lie to the firearms media about his past support for restrictions on the Second Amendment. As The Truth About Guns' Robert Farago noted a few months ago: 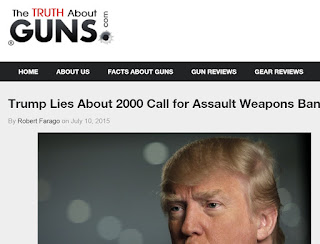 Ammoland’s Fredy Riehl had a sit down with The Donald on gun control. Click here to read the edited Q&A, in which the Republican Presidential candidate says all the right things about gun rights; from “take your expanded background checks and shove ’em” to ammo mag restrictions make about as much sense as a Brady Campaign machine gun shoot (paraphrasing) to arm our soldiers on our bases. That said, when Freddy presses Trump on the call for an “assault weapons ban” and a “slightly longer waiting period” for gun purchases in his 2000 book “The America We Deserve,” Trump lies his you-know-what off. . .

I certainly stand by my opposition to Gun Control when it comes to taking guns from law-abiding citizens. You mention that the media describes the AR-15 as an ‘assault rifle,’ which is one example of the many distortions they use to sell their agenda. However, the AR-15 does not fall under this category. Gun-banners are unfortunately preoccupied with the AR-15, magazine capacity, grips, and other aesthetics, precisely because of its popularity.

How do I put this politely? Bulls***.

As for the previously stated support of an extended waiting period before a lawful gun purchaser can take possession of their lawfully purchased firearm, Freddy didn’t press The Donald...

Again, this interview with Trump was in 2015.

Perhaps the Trumpinati can explain his proclivity to dramatically alter his liberal past to the point where mainstream gun media calls "bulls***".

But I won't hold my breath.

I'd like to know one position in the past 20 years that Trump has not issued multiple positions. He swings around more than any stripper on a pole. What amazes me about Trump are a lack of specifics. He's like Bernie Saunders. He'll make America great again, trust him. Isn't that what Obama said.

Yet he has contributed to all the major Demorat political figures in NY. He promises to get things done-a promise that we saw recently with RyAN AND mITCH ocONNELL. I don't want a deal, I want a deal that benefits us-which means you walk away when its bad.