Muslim appropriation of Jewish suffering is obnoxious to begin with, but the bizarre habit of Muslims wearing yellow stars has been condemned by even liberal Jewish groups. It's insanely and gratuitously offensive.

It continued well into the 20th century. Here's an example of the justification given in a letter to the head of the Jewish community in Egypt in 1913. 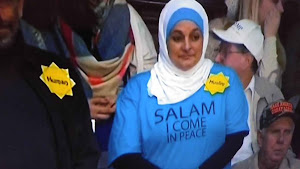 This is life for Jews under Islam.

Finally, let's consider what the yellow star signifies. The six-pointed star represents the House of David; meaning an independent Jewish state. It's the symbol of the State of Israel. It's the very thing Muslims have been feverishly trying to destroy by every means possible.

Gonna be a target rich environment pretty soon.
Got Crusades?