I wonder what Mr. Trump will call Iowans if he loses the Caucuses on Monday? 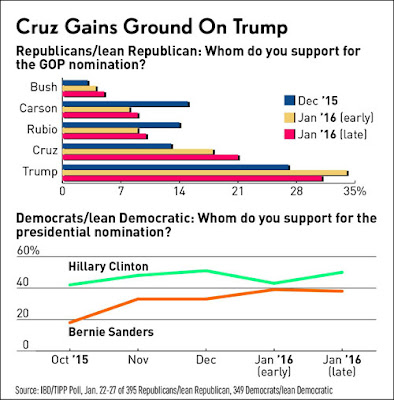 Support for Trump fell to 31% among registered Republicans and Republican leaners, down from 34% in the prior IBD/TIPP Poll...

...Meanwhile, Ted Cruz saw his support climb three points to 21%, the highest number that Cruz has achieved in five months of polling.

This comes after Trump has spent several days launching sharp attacks at Cruz, challenging his eligibility to serve as president, and attacking his character.

And Dave Blount adds this nugget:


As for the delusional belief that Trump will draw votes away from Democrats,

While Trump’s attacks didn’t move the needle among conservatives, his support among moderates fell from 39% to 24%, while Cruz’s jumped from 5% to 18%.

Trump’s campaign is based on hype, anger, lies, and nonsense. It is only a matter of time until this impending train wreck goes off the rails. The question is whether that will happen before or after the nomination is secured.

Donald Trump could not be reached for comment, but I suspect his reaction would be to call Blount "a loser, a lightweight, and a failure."

Talk about drawing sweeping conclusions from one poll with the following cross tabs, when it's not remotely in line with any other polling in the past week:

So a total sample of ~400 Republicans equals a "meltdown"? Really Mr. Ross? Oh I know, it isn't your headline, right? You're just quoting IBD, is that it?

I will say this, however: enjoy this outlier, because after Thursday's debate, where the consensus seems to be that Bush-Rubio won, you'll not likely see its kind again...

Meltdown? A bit of an exaggeration especially this close to the primary voting.

Cruz is currently in the hot seat for employing the Obama tactic of 'shame mail' that outs a persons voting record to neighbors.

Whose bright idea was that one especially at this late date?

Lol, I see the TrumpBorg are out, selling their phony story about Cruz. I'm willing to bet that, when the mailers thing is fully investigated, it will be found that some associate of tRump was responsible for them. Whether he'll have a meltdown or not, I think his popularity has been hyped by a combination of actors pretending to be supporters at his rallies and keyboard warriors in his employ. Trump's tantrum after losing Iowa on Monday night is going to be hilarious.

The Cruz campaign has already admitted they sent out the mailers and the Iowa State elections commissioner also verified the story.

Trump had nothing to do with this.

It's all out there on the upper left corner of THE DRUDGE REPORT. It will be all over Iowa tomorrow.

Stop lying, Cruzbots ! Meltdown is happening, that's for sure...