In Oregon, college officials exercising their power, had instituted a no-guns policy, including disarming their security personnel. In California, most citizens are disarmed by the absence of shall-issue handgun carry laws.

The result, in those cases, was the ability of the perpetrators to be reasonably sure they would be operating in a so-called gun free zone.

Here in the United States over the last two decades, politicians have misused their legislative power to carve out these gun free zones. They have used their power to say to the good citizens of their communities, “You can’t bring your firearm here,” and good citizens either stay away, or when they enter these criminal empowerment zones they are required by law to leave their guns behind. In the first week of 2016, the White House let it be known that unilateral executive actions are planned against gun rights.

The problem with many of the elitists who are in power these days is that they, like tyrants and petty potentates of old, think power should reside only in the hands of the ruling class.

If unchecked, this always leads to an increasing disparity of power, with the ruling class seizing more and more power from the citizenry.

The Founding Fathers, in establishing the United States, brought forth a new nation, “conceived in liberty”. They held that government operates with “the consent of the governed”. But, because the ruling class continually seeks a monopoly of power, a perpetual tension is created between the governed and those that govern.

Having won a war for independence from Great Britain, the Founding Fathers put the Second Amendment in position two in the Bill of Rights. Scholarly research has affirmed the original intent of the Second Amendment, supporting the idea of the people being armed with weapons similar to the weapons of the soldier.

This arming of the citizenry, part and parcel of the notion that the people as a body have the right and ability to rise up and throw off despotic government, is referred to as the Insurrectionist Theory. Some say that this theory is invalid because of the tremendously powerful weapons that the United States Armed Forces have at their disposal.

The fact remains, however, that our well armed soldiers in combat in the Middle East have not, in spite of their tremendously good weapons, training, and tactics, been unable to totally eliminate insurrectionists like the Taliban.

How effective, then, would they be if ordered to implement martial law all across the United States, against citizens armed with three hundred million or more firearms. 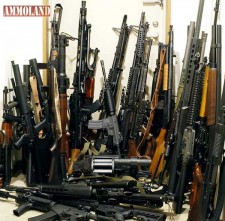 Many of these are of the AR and AK variety; semiautomatic versions of the American and Russian issued weapons.

No wonder, then, that many in power in the United States today, as well as many seeking power, have an ongoing strategic agenda to disarm the people. This can come in a number of different forms, including gun registration, gun bans, no-fly no-buy legislation, universal background checks, magazine bans, ammunition bans and purchase limits, gun free zones, and even so-called gun buybacks.

This agenda (willingly advanced by many in the media) includes usage of terminology that is designed to add an aura of shame to anything associated with guns. For example, if a man uses a gun to commit a crime, he is reported to be a gunman and his crime is a gun crime. But, have you ever heard the term knifeman used? What about car crime? By controlling the narrative, they control the message, and thus the masses..

State and local governments are not immune from this irresistible quest for power. We have seen states such a New Jersey enact laws that assure innocent visitors days or weeks in jail for “illegal possession” of a firearm in the Garden State.

Other states, although much friendlier overall, include Tennessee, whose governor has stated publicly that he will sign a Constitutional (permitless) Carry bill, yet the Republican supermajority has not sent such a bill to his desk for signature. This ongoing expensive poll tax of the permitting system requires Tennesseans to pay a fee if they wish to carry a defensive weapon on their persons.

North Carolina, also in the gun-friendly South, still requires that handgun purchasers first get permission in the form of a license, at great personal inconvenience, from their local sheriff.

Rights organizations and individuals on the national, state and local level continue to press the legislatures and courts to restore the balance of power, and ease the tension between the people and the government.

When will this tension end?

May that day never come! [aka Molon Labe]