"I'M GOING TO DO A LOT OF THINGS": Trump Vows to Use Obama-Style Executive Actions to Bypass Congress

Some conservatives are concerned over Republican presidential frontrunner Donald Trump’s vow to take the same path of bypassing Congress as President Barack Obama – even though the billionaire said his actions would be “much better” than Obama’s and done for “the right things.”

“Does Mr. Trump enjoy power? Is he more likely to prefer limited and constitutional or unlimited and unconstitutional power? Where is he likely to fall on that scale? I tend to think it’s with the maximum possible exercise of power,” Colin Hanna, president of the conservative public policy group Let Freedom Ring USA, told TheBlaze.

Trump, as president, might well use the executive powers to advance conservative causes, Hanna added, but he said there is more at stake.

“Every conservative at heart is a constitutionalist. The values are intertwined and inseparable for separation of powers and a limited federal government,” Hanna said. “He might use executive power on issues we agree with. The point is, it isn’t about the individual issues. It’s a deeper and fundamental question.” 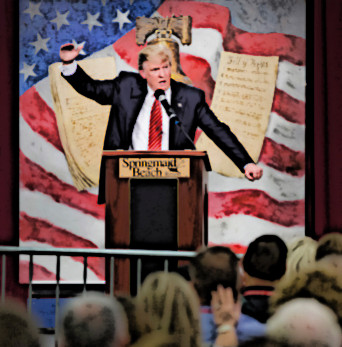 President Barack Obama has used executive action most recently to restrict gun sales. Before that, he shielded about 5 million illegal immigrants from deportation and to delayed implementation of some of the most unpopular aspects of his own health care law. After last week’s State of the Union address, White House Chief of Staff Denis McDonough promised “audacious executive action” in the president’s final 11 months.

During an interview with NBC News, Trump was asked if he would use executive actions in a similar fashion to the way President Barack Obama has.

In a separate interview with CBS News, Trump said of executive action, “Well, I will say this: There’s a lot of precedent based on what he’s doing.”

“Conservatives have been angered at the Obama pen-and-phone approach to bypassing Congress; they should be equally disturbed at Trump for viewing Obama’s unconstitutional power grabs as a model that he would follow,” David McIntosh, the president of Club for Growth McIntosh, told TheBlaze.

Trump has soared in GOP primary polls despite his previous support for funding Planned Parenthood and abortion rights, favoring a single-payer health care system and for expanding the powers of government to seize private property among other liberal positions. This has come at the angst of many in the conservative movement.

“Donald Trump has already made it clear that he’s like Obama in supporting single-payer health care, bailouts, and higher taxes,” McIntosh said. “So, it’s no surprise that Trump also wants to trash the Constitution by abusing executive power.”

As a candidate for president, Trump has taken a conservative stance on illegal immigration and advocated cutting taxes, while he has considerably softened on his other liberal positions.

“He’s aggressive not necessarily progressive,” Hanna said. “His political philosophy is an appreciation of his own brilliance and that he can solve problems better than anyone else. He is not guided by a set of principles or a philosophy.”

The Trump campaign did not respond to inquiries for this story last week or on Monday.

He wrote that Obama’s actions would encourage his success to move similarly. At least, Yoo wrote, that makes more of Obama’s agenda reversible.

“Obama’s upending of the Constitution’s structure and limits may prove its own undoing,” Yoo wrote. “The next chief executive can suspend, and then repeal, all of the executive orders and regulations of the past seven years. He or she could terminate the Iran nuclear deal and the climate change pact; reinstate enforcement of the immigration laws; and fully reveal Obamacare’s distortions of health care. The further Obama stretches his powers to reach for a legacy, the more powerfully his successor can snap the Constitution back into its proper shape.”

Read more at The Blaze.

I prefer and will vote for Cruz in the caucuses/primaries, but I have if Trump is the nominee, I'll vote for him.

Maybe the Democrats need to learn a harsh lesson by having a President Trump use the same tactics they used against all their political opposition, Republican or otherwise. Maybe they'll find new respect for the Constitution that way.


Want to hear what TRUMP thinks on the ISSUES ?? 2 min video

The similarities between Trump and Obama are at best disquieting. I wonder if all the people supporting Trump are not bothered by these similarities. If Obama was a monster for trashing our Constitution, how will Trump's actions, even if intended for a good purpose, be any different, in the long run?

This article reads like an one-dimensional, cartoon-like criticism of someone (and that's the author's first mistake: he doesn't understand the SOMETHING that is the driver, propelling "the someone"). The author clearly does not WANT to get it.

Simply said, Americans love America, and betrayal has its limits.

Think about that, author.

Maybe this will help:
http://politicallyshort.com/2016/01/24/americas-ruling-class-vs-all/

If not, maybe this: http://www.americanthinker.com/articles/2016/01/national_review_its_too_late_to_dump_on_trump.html

In any case, enjoy the coming Trump Era.