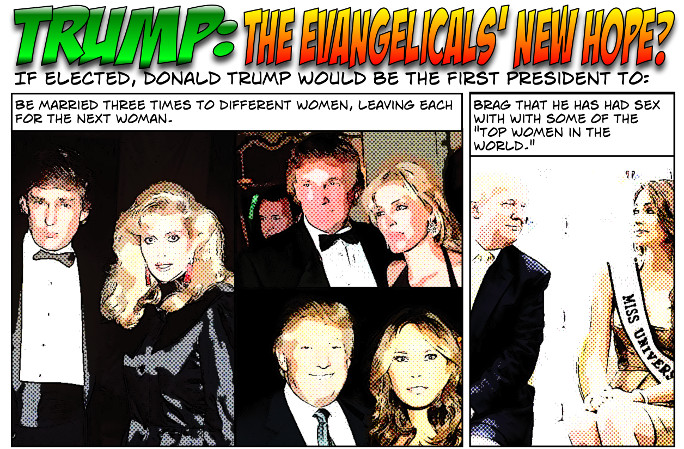 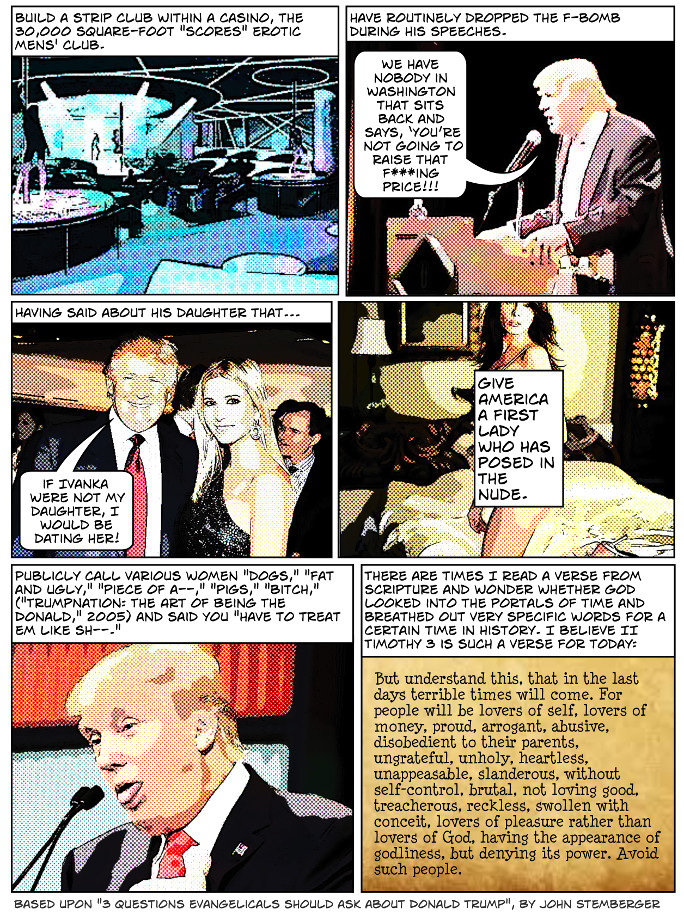 If you're an evangelical voter, it may be worth reviewing Mr. Trump's record. Consider whether his values align with yours.

at 7:14 PM
Email ThisBlogThis!Share to TwitterShare to FacebookShare to Pinterest
Labels: Faith, Trump

If it came to a choice between him and hilary, I'd go for Trump. At least he doesn't hate America...

Hell, boys, I'd vote for Trump (or an empty cigarette pack) over Hillary. With that said, I think we can do better. Namely a guy who's fought his entire life for the Constitution, by the name of Ted Cruz.

Seriously, those character traits of Trump's have nothing to do with my liberty and freedoms or a legitimate government that honors the rule of law and its constitutional limits.
And those things are his business to pursue. Just as I have mine. Liberty for me liberty for thee.
As long as whoever becomes the next president, I could care less what they have done long as they are faithful to their sacred oath of office. Because that is presidents job. To protect and defend the constitution. Not whether they ran a titty bar or use foul language, or how many times they have been married. It is really none of my business. Is Trumps behavior a conflict of interest? I do not think it is. Even if I was to disagree with his past, it doesn't have bearing on my prosperity and happiness. But his business acumen and success does. I'm completely fed up had enough with status quo crony capitalism and the wonton corruption, lying, and elitism of those currently in power. And that includes every darn one in Washington DC. Including Ted Cruise. Enough! It is time to get rid of every single one of them no exceptions.

In all honesty, Ted Cruise is a member of the elitist cabal that is running things. He really hasn't been very effective in Congress. Is he the successful individual Trump is. I'm not seeing that. His wife is a senior management officer in one of the most crooked and dishonest financial institutions in American history, responsible for the greatest theft of wealth in human history in 2008. Out of principle and the unquestionable track record of deceit and hubris of every politician I have seen but for Ronald Regean and a few others in my more than half century on God's green Earth. Cruise is not upfront or come clean on this and a couple of other questionable things he was involved in. You could put a gun to my head, pull back the trigger, and I would refuse to vote for any current politician in existence.

Trump is my big fuck you to the PYB.
He is the last chance too.
If he screws the pooch, it is armed violent revolution against him and all the rest.
There is no second chance on this.
Never again.
It will be time to hang and shoot them all.
That is not a threat or a wish on my part.
That is just what is going to happen, that is how history plays out.

Trump in 16 ... something about cruz is not right

Something about Trump is not right.
It's called Progressivism. Big Bucks Capital Cronyism.
With a bonus - megalomania. Had enough of that.
Cruz 2016.

The nerve of that Trump guy! After all, getting a divorce, and opening a legally-licensed nightclub are COMPLETELY ILLEGAL, having high self-esteem, confidence and motivation are COMPLETELY DESTRUCTIVE to one's personality, and, of course, NOBODY EVER SWEARS, EVER!

Yep, he's far worse than the President we have in office now! ;-)

Well, that was disappointing. I'm for Trump, say what you will.

Ted Cruz has no executive experience; he's been on the government teat most all of his career.

Care to name his donors? You know, the ones he's beholding to? I doubt it.

His wife works for a strange outfit, if you don't like crony capitalism that is. Oh, I know, she's on leave; not to bring it to our attention, don't ya know. Still, working for Goldman Sachs does bring up some doubts.

Ted signed on to the TPP and supports more H1B visas; tell me again how that benefits us ordinary Americans, I must have lost that memo because I can't figure that out and it puzzles me mightily.

Does Ted have an impressive record of accomplishing what he set out to do, or a record of being abrasive and hard to get along with? Seriously. If he doesn't have that record, who does?

Donald Trump's record is out there in plain sight. Lots of people have attacked him on just about every item in his record, and the Donald is still flying high. He gets the job done, before deadline and under budget. He appeals not just to GOPe "leaders" and "elites" but to all Americans who care about correcting the nose-dive this country is in.

Even his ex-wives have nothing bad to say about him!

I think you, Doug, and (marvelously talented) Intern Biff, need to re-examine this and see if you can't come to a different conclusion!

Ted Cruz lately has been much tougher in talking about stopping illegal immigration. Is this for real, or just more politican-speak? Donald Trump said it first, loudly and continuously. If we don't stop this flood of illegals, this country is dead. Look at California, which was once the Golden State of Reagan's sainted memory; now it's a shithole with most driver's licenses given to illegals- and you know they also have a "motor-voter" law don't you? Do you really believe that this flood of illegals won't be voting? Or can I sell you a bridge, real cheap?

I could go on; but I guess you have the idea. Go Trump! We need to Make America Great Again!