This is How Democracy Dies

The attacks on Trump supporters at a rally in San Jose last week were another example of the left’s violent assaults on free speech and association. Before the election there is likely to be more thuggery, as an emboldened left lets slip their dogs of war to foment disorder to continue Obama’s aim to “fundamentally transform” America. As the long history of political philosophy teaches, this undermining of law by violence is an important sign of democracy’s impending doom.

Over 2100 years ago, the Greek historian Polybius described how democracy dies:

So when [the rich] begin to hanker after office, and find that they cannot achieve it through their own efforts or on their merits, they begin to seduce and corrupt the people in every possible way, and thus ruin their estates. The result is that through their senseless craving for prominence they stimulate among the masses both an appetite for bribes and the habit of receiving them, and then the rule of democracy is transformed into government by violence and strong-arm methods. By this time the people have become accustomed to feed at the expense of others, and their prospects of winning a livelihood depend upon the property of their neighbors, and as soon as they find a leader who is sufficiently ambitious and daring . . . they introduce a regime based on violence.

It takes only a few revisions reflecting the modern world to see how closely Polybius’s analysis describes how the ideology and policy of the progressives are degrading America’s democratic republic. 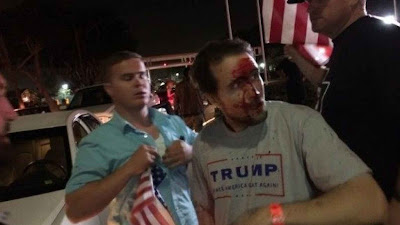 First, the progressives have “seduced and corrupted” the people not, like the aspiring tyrants of old, by spending their own money, but by redistributing the property of other citizens via the 16th Amendment, which instituted the federal income tax. Over the next century the funds appropriated by the IRS have financed the “bribes” for the people: the various social welfare programs and transfers that relentlessly have escalated in number, scope, and cost––in 2014 these programs ate up two-thirds of the federal budget.

These transfers have indeed “stimulated” both the “appetite” of the people for even more government programs, and the “habit” of receiving them. That is why today the biggest problem facing our economy––the unsustainable entitlement spending that threatens in decades to gobble up every dollar collected by the feds––got only cursory attention in all the speeches of the presidential candidates from both parties. Indeed, the Democrats want to create even more programs and spend even more money on these “bribes.”

More insidious is the progressive update of “government by violence and strong-arm methods.” Rather than physical violence, we have the regulatory regime that Tocqueville predicted, one which “covers the surface of society with a network of small complicated rules, minute and uniform, through which the most original minds and the most energetic characters cannot penetrate.” Both parties have been guilty of feeding this regulatory cancer, but Obama has blown past all previous records. In 2015 just under 82,000 pages of rules and proposed rules were published, an all-time high. In his last year, Obama is pushing 4000 new regulations covering every dimension of business and private life. As a result, the freedom of citizens and businesses alike is diminished, subjected to the tyranny of executive agencies staffed by anonymous, unelected, and unaccountable functionaries.

Then there is the cultural violence, the tyranny of political correctness that has encouraged the tantrums of privileged “snowflake” college students who demand “safe spaces” and the punishment of “microagressions,” and are eager to use the state’s police and judicial power to silence those who challenge their ideology. Government, media, schools, and popular culture all practice self-censorship in order to mollify these budding tyrants, at the cost of everybody else’s freedom. We may not be threatened by the physical violence that ancient tyrants used to enforce their authority, but these regulations and informal speech codes are in the end backed by the coercive power of the state, which can sue, fine, and imprison those who fall afoul of their regime of rules.

Thus we resemble the degeneration of democracy into tyranny described by Polybius. We have become a people who are “accustomed to feed at the expense of others,” and who live under a “regime based on violence” inflicted by a bloated federal government. And no matter how “soft” the despotism, nonetheless its concentrated and expanded power diminishes our freedom and autonomy.

Other insights of Polybius are as pertinent now as they were in the 2nd century B.C. What better description of Hillary can you find than “a senseless craving for prominence,” “sufficiently ambitious and daring,” or a “hanker[ing] for office” that lies beyond her “merits”? Her relentless ambition has been obvious for 25 years, and her promises to follow in Obama’s footsteps and double-down on the entitlement state and its regulatory tyranny are the “bribes” she is relying on to win the presidency. And what makes this ambition “senseless” and “daring” is her lack of any qualities of character or record of achievements that would qualify her to be president. Like the tyrants of ancient Greece––disaffected aristocrats who believed they were entitled by birth to rule over the ignorant, low-born masses––Hillary’s only claim to the presidency is her status as a princess instead of a prince of the Democrat Party’s elite.

More troublesome is the physical violence that has attended Trump’s rallies, and that may escalate in the months ahead, recalling the thugs and gangs that stalked the city-states of ancient Greece and elections in Rome during the last days of the Republic. Of course, such violence has marred American politics in the past, but the country and its culture have changed radically in the last few decades. In 1968, when the new left incited violence at the Democrat convention, the Democrat mayor of Chicago and the Democrat political establishment forcefully condemned the riot. George Meany, head of the AFL-CIO and Democrat Party stalwart, called the protesters a “dirty-necked and dirty-mouthed group of kooks.”

Those sorts of Democrats have nearly disappeared, and the leftists of 1968 have transformed the party. They and their epigones have infiltrated the media, popular culture, and most important the schools and universities. Most are a peculiarly wimpy sort of leftist, whining about “microagressions” and “safe spaces” from the tony precincts of prestigious universities. But they still vote and wield enormous influence. And they are reinforced by the progressive Brown Shirts who instigate violence at Trump’s events. Worse yet, the Democrat establishment has been indifferent to such violence, issuing generic condemnations as a preface to blaming it all on Donald Trump, as Hillary did after the San Jose violence, or the mayor of San Jose did when he said, “At some point Donald Trump needs to take responsibility for the irresponsible behavior of his campaign.”

So are we approaching an election reminiscent of Polybius’ analysis of democracy’s demise? Will we see increasing violence at both parties’ conventions, as the minions of wannabe tyrants up the ante in order to further their ambitions for even more government control at the expense of individual freedom? Will the people ultimately decide they’d rather continue to “feed at the expense of others” than to be free citizens taking responsibility for their lives? Finally, will our already weakened democracy come closer to breathing its last?

These are the actions routinely seen during elections in the South American socialist crappots Che-bama keeps busing in people by the thousands. Che is fundamentally changing America...into a socialist banana republic like so many that have failed time and again.

That "network of small complicated rules, minute and uniform" are often contradictory. Follow one regulation and violate another. Adhere to the second and break the first (or a third reg.) It becomes nigh impossible to abide by such petty regulations and laws, leaving everyone suspect under law and susceptible to legal penalty, up to and including loss of assets, freedom (read: jail), and employment (read: future income).