Most Transparent President Ever Has Bar Records Redacted This Week, Leaving Only Traces of His Existence Some Betamax Videos and a Fraternity Pin

President Obama's Occidental College transcripts have never been released. His Columbia transcripts are, likewise, AWOL. And his Harvard Law transcripts also haven't been made public. Finally, it's reported, he never published any articles while at Harvard, yet somehow served as Editor of Law Review. That would make him unique among editors, according to insiders. 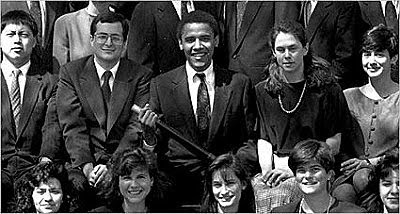 Even John "D Student" Kerry was guilt-tripped into releasing his transcripts.

Curiously, since I relayed a report of Obama's "teaching career" at Chicago (he was apparently never a law professor, as some have claimed), the Illinois Bar has decided to partially redact what little public information it had available on its website related to the President's legal status.

On March 1st, I captured the public records available at the Illinois Bar's website for the President (click to zoom):

Today, thanks to an eagle-eyed commenter, what little is available in the record has been partially redacted: 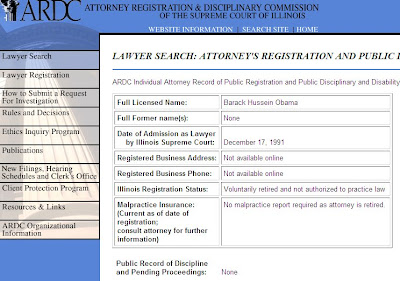 For some odd reason, the date that Obama was last registered to practice law in Illinois was erased within the last few days.

Perhaps it's just some clerical issue or a database cleanup problem.

But when even the tiniest breadcrumbs of background information on this, the most mysterious President ever, begin disappearing, I think it's worth asking some questions.

And perhaps The New York Times or Glutes Sullivan could reassign a cub reporter from the Sarah Palin detail in Wasilla to find out just what the President's grades were -- and how he actually paid for school.

Also Related: Q&A with a former Editor of Law Review at one of the top schools in the country.

Question: Have you ever heard of someone who became editor of law review without publishing a paper (like our beloved 44th president)?

Answer: The answer to your last question is no. Most, if not all law reviews, publish notes or articles from second-year law students who are members of the Law Review. The editors are third years. It's hard to imagine that a third year would be elected editor in chief without having previously published an article. If a third year isn't a good enough writer to have an article published in the law review, he or she probably isn't good enough to edit someone else's article.

He was elected "president" of the Harvard Law Review, not "editor." It appears that it may have been based more on popularity (with a bit of affirmative action) than any particular talent for publishing.

In the line 'other names used', it says 'none'. That couldn't be further from the truth: he used names such as 'Barry Soetero; Barry Dunham".
Would this not be considered 'perjury'? Just asking.

rub a dub dub, how many IDs does one profile need?

Notice this one is currently scrubbed completely (http://www.docstoc.com/docs/8387375/Lawyers-Attorney)

If Barry's multiple names trouble you try checking out his Social Security numbers... then his passports.

"In 1994, freshly out of Harvard Law School, he joined two other attorneys in filing a lawsuit against Citibank, the giant mortgage lender. In Selma S. Buycks-Roberson v. Citibank, the plaintiffs claimed that although they had ostensibly been denied home loans "because of delinquent credit obligations and adverse credit," the real culprit was institutional racism. The suit alleged that Citibank had violated the Equal Credit Opportunity Act, the Fair Housing Act and, for good measure, the 13th Constitutional Amendment, which abolished slavery. The bank denied the charge, but after four years of legal wrangling and mounting legal bills, elected to settle. According to court documents, the three plaintiffs received a total of $60,000. Their lawyers received $950,000."

So he not only legislated that banks make bad loans, he sued to force them to make bad loans--the failure to do so being the moral and legal equivalent of slavery. And got rich doing it.

Why was he admitted to practice in December 1991 when the rest of that year's class was admitted in November? What caused the delay?

In this article that is referenced:
http://www.nytimes.com/1990/02/06/us/first-black-elected-to-head-harvard-s-law-review.html?pagewanted=1
Note paragraph 3. There is a quote ''It's encouraging. without the closing quote. It looks like something else was written there originally and then removed by the NYTimes.

It would be easy to check if Obama were editor of the Law Review. Just look at the inside cover of any of the Law Reviews that were published during his tenure. The first thing you see on the inside of the publication is who the Editor in Chief is. This is true of all law school law review publications. Just go to your nearest law library and look for it. All law libraries have the Harvard Law Review, its the most prestigious in the country.

A good writing style and information is certainly useful. For all readers continue to write such excellent articles. Thank you.