The invaluable Market Ticker pulls a troubling snippet of news out of Hanson Advisors' latest missive. Put simply, President Obama's HAMP program is a complete failure; it seemingly encourages fraud, harms banks and isn't finished yet. Consider the profile of the average consumer with a new, "affordable" mortgage:

Gross debt-to-income ratios of 59.8% after modification?

Folks, do you understand what this means? The average gross income of these folks is $2,702, or $32,433 annually. But their debt-service ratio, or amount of debt post-modification, is 59.8%. 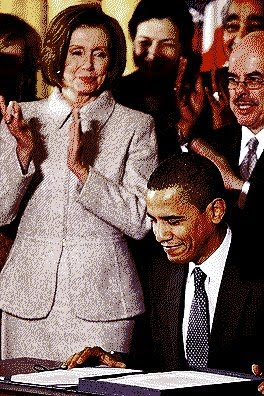 That means they're spending almost as much on their other debts as they are on their house payment, even after modification.

[A] person with a $2,702 monthly income has the following "come out" of their check:

This "average person" has $579.30 once their mandatory debt service and withheld taxes are deducted, and from this they must pay:

* Electrical, water, sewer, and garbage disposal services.
* Health costs, if any (including deductions from their paycheck, co-pays, etc)
* Automobile insurance for their car, along with gasoline.
* Food
* Hazard insurance on the house.
* Any other expenses (e.g. clothing, school supplies if there are kids in the home, any sort of recreational activities, etc.)

All on $600 a month for a family of four? You're joking, right? ...Good luck just buying your food and paying the electric bill on what's left!

HAMP is a complete failure (only the 703rd consecutive big-government failure related to the housing market, but who's counting?). These individuals can't possibly afford their new, "affordable" mortgages.

As the Ticker points out, lawmakers are intentionally avoiding the bankruptcy route for both the consumer and the lender. Note that this is the same approach the Obama administration tried with the auto companies and the UAW.

In short, the unions and the bankers were paid off -- courtesy of you, the taxpayer -- but the salve is only a temporary remedy. The bill will come due someday soon. And because this administration can't deal with economic realities, the fall will be far swifter and far more painful than it ever needed to be.