Stupak: the Sanctity of Life is Important to Us, Which is Why We Will Slash Care for Old People and Further Enslave Children to Massive Deficits 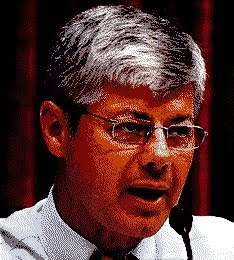 Moments ago, Democrat Bart Stupak announced that a deal had been brokered between the President and the Democrat pro-life contingent in the House.

In exchange for their votes, the President will sign an Executive Order banning -- supposedly -- federal spending on abortions. Nancy Pelosi gets a dozen or so hard-fought votes that almost guarantee the successful passage of the Senate health care bill in the House.

Ironically, Stupak's pro-life posse of Democrats are assuredly condemning children and generations yet unborn to massive deficits, when our existing entitlement programs are already broken.

The bill uses every account gimmick known to man -- including slashing Medicare payments (really humane, Bart) and double-counting the cuts -- and invents a few new ones to create a brand new entitlement when the country is already in dire financial straits.

This bill fundamentally changes the relationship between the federal government and the people; and it does so in a despicably evil way. Health care will, there is no doubt, be wielded as a political weapon to reward and punish.

Congratulations, Bart Stupak and your so-called "Pro-Life" Democrat Caucus, you've sentenced the unborn generations of this country to misery, poverty and economic ruin. Way to stay true to your beliefs.

You aren't pro-life, you're low-lives.

The Legislative branch decides how much to spend and on what.

If the President signs an executive order, that in effect says, “Well, the relevant federal agency can’t spend money on that”, then he’s the one deciding what the government will spend money on... in which case, he’s clearly abrogating powers to the Executive branch that are clearly the Constitutional prerogative of the Legislative branch.

Furthermore, the SCOTUS can/will weigh in on this issue because deciding Constitutional matters of Presidential over-reach is well established precedent for the Judicial branch and well within their purview.

Presumably, Stupak knows this, as it’s POLI SCI 101 in which case he's pretending not to know this for political cover so that he can safely switch his vote, which makes him an unprincipled hypocrite. But if he really doesn’t know the purpose, function and boundaries of the legislature of which he's a part, then hasn’t he just demonstrated his unfitness for the position he holds?

What a piece of work.

Stupak had better stick a fork in himself, because he's done in November. Jeez, any guy who sells his vote for sweet nothings and an instantly-reversible Executive Order is verifably insane and not fit for further service in Congress.

It looks as if Stupak gets nothing. But as details emerge we may learn otherwise.

He wants some cover for his yes vote and will pretend he got it despite any evidence.

Some sort of deal for an Executive Order? Who did he speak with? Exactly what will it say? When will it be issued. Why not make O issue it before the vote?

O can write an EO which means nothing. Or he may not write one at all. What could Stupak do? The media would back O all the way.

O is a master at denying his own words even if he was taped making them.

IMO Stupak is not that stupid. Either he got a covert personal payoff or he ultimately was afraid to defy his party.

“I fear all we have done is to awaken a sleeping giant and fill him with a terrible resolve.”

Thanks for staying strong, Stupak! Hope you sleep well tonight!

Here's the guy running against Stupak. I donated $ as I'm from Georgia. Saw somewhere that this Doc is getting about 50 new fans a minute. Dunno if that's accurate.

The absolutely amazing thing to me is the complete and utter lack of courage in Congress on the Democrat side. Does anyone think Michele Bachmann would cave on something like that? They both believe in the sanctity of life so that can't be it. They're gutless and the reason they're gutless is because by virtue of even being Democrats they've already surrendered the notion of being self-sufficient. Most of the self-made men and business people are Republicans. Most of the political hacks are Democrats. They survive on cowardly things like political expediency, deceiving voters, and voter dependency. Republicans rely on common sense and tougher stances and actually saying "no" once in a while. I have learned that we can NEVER rely on a Democrat to stand firm on anything because they have no real core beliefs. Everything is bullshit and appearance, nothing is real to them and they live in a world of "gray". Deception is acceptable and the ends always justify the means and they're never called on it. They don't even have the courage to live by the rules they impose on everyone else. I expect absolutely NOTHING from anyone that has a "D" next to their name except that they'll pick my pockets and try to take away my liberties.

It appears that Stupak was bought really cheaply. The Abortion Executive Order is basically meaningless and he got only $726,409 for his district.

Thank you for your blog and for drawing attention to the Sanctity of Life. You can help cover the unborn with prayer by posting this prayer request to your blog's side panel.