Without any other pressing matters of concern looming, California assembly passes resolution to ban cursing

Some satire writes itself, and in the case of Democrat politicians, it often comes fast and furious as they try to steal more and more of your liberty.

Amid the ongoing — and occasionally tense — debate over how to clean up California's budget mess, lawmakers have taken time out to tidy something else almost as unmanageable: our language. This morning, the Assembly approved a ceremonial resolution turning the first week of March into "Cuss Free Week." 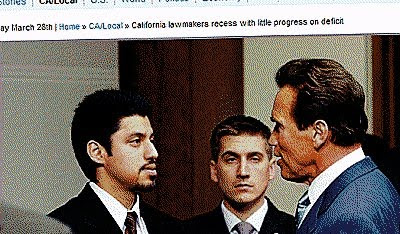 ...To keep folks honest, Portantino is handing out no-cuss jars to all 120 legislative offices in the Capitol — and to Gov. Arnold Schwarzenegger. Every time a naughty word slips out, a few coins get dropped in.

That leaves $18.5 billion to go... Almost all the savings resulted from one bill that replaced the state’s existing tax on gasoline with a new one. The new tax siphons a bit more than $1 billion in revenues that used to go to local transportation.

at 12:03 PM
Email ThisBlogThis!Share to TwitterShare to FacebookShare to Pinterest
Labels: Democrats, Economy

And don't forget Arnie was elected in 2003 after Gray Davis was recalled due to budget problems then.

The truth is CA hasn't balanced its budget for decades. Every accounting trick known to man, many illegal if used by individuals, has been used to hide that.

After three years the spending cuts have been so trivial they solve nothing.

The evidence is there. The state isn't going to fix its budget and most of the political establishment never intends to.

That matches Einstein's definition of insanity. And several other states and the feds are not far behind.

What a bunch of stupid fucking assholes.