Power companies are spending a lot of time and effort marketing "smart meters", "smart grids" and similar programs aimed at micromanaging our consumption of power. Even if you ignore the Orwellian nature of these efforts, another aspect of these devices should deeply trouble customers: they are vulnerable to computer-based attacks.

A security company has found holes in two-way meters that could allow a person with a laptop to tap into the communications between people's homes and utility companies. 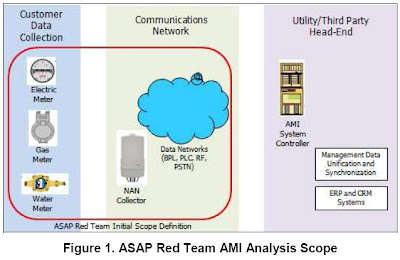 Security consulting company InGuardians was hired by three utilities to test the vulnerability of smart meters from five manufacturers and the systems used to manage them, according to an Associated Press report.

The results were that smart meters, which create a network link between customers and utilities, have a number of potential vulnerabilities that could lead to scenarios such as a criminal remotely turning someone's power on or off...

...The communications standard used by smart meters, in particular, was an area that was a cause for concern, said Joshua Wright, a senior security analyst with InGuardians. If criminals are able to tap into the network, they could potentially doctor another person's bills or even stage bigger attacks on the grid, according to the report.

InGuardians has published a number of research papers on vulnerabilities in power grid security. They cover topics such as the security of Zigbee, the wireless standard used by some smart meters for in-home communications, as well as an "attack methodology" for two-way meters.

Studying the security vulnerabilities of the power infrastructure has become more common as efforts to modernize the electric grid with digital communications take hold around the world. Security company IOActive, for example, published a report last year showing that smart meters could be manipulated to give a criminal control over many meters.

There have also been public disclosures of attempted cyberattacks on the U.S. power grid.

But don't worry, rubes: what could go wrong?

Now that even "green" think tanks are troubled by the religious fervor of the Warmists, it's time for customers to push back on power companies. No big brother technology. Spend money getting us more power, not trying to move us to a third-world power grid.