Larwyn's Linx: The End of the Beginning 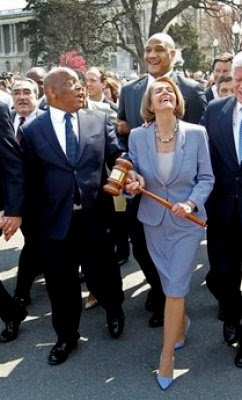 Obama has crossed the Rubicon: Hanson
Steyn: This is even worse than you're thinking: Ace
Glenn Beck's blast from my past: TBO

Where were you when the Republic died?: AT
Stupak: either dim or dishonest: DC
What's Wrong With a Little Socialism?: Marathon

Third Act for the Jerusalem Crisis This Week: AT
Stop the Wars! ANSWER L.A.: AmPower
Khamenei accuses Obama of plotting on Iran: Maktoob

Seriously, Doonesbury is still being produced?: iOTW
Half Irish and Half Proud of It: IowaHawk (Tape-Delay)

"Investor’s Business Daily argues that the “health” debate is really a proxy fight on the size and role of government. According to their poll, 64 percent of people think the federal government has “too much power.” Correct. But a big chunk of that 64 percent voted less than 18 months ago for a man and a party explicitly committed to more government with more power, and they’re now living with the consequences. Obama is government, and government is Obama. That’s all he knows and all he’s ever known. You elected to the highest office in the land a man who’s never run a business or created wealth or made a payroll, and for his entire adult life has hung out with guys who’ve demonized (deemonized?) such grubby activities. Many of which associates he appointed to high office: Obama’s cabinet has less experience of private business than any in the last century. What it knows is government, and government’s default mode is to grow, and grow. " -- Mark Steyn

re: QOTD. The American people chose between two candidates who were both committed to bigger government.

In fact both were commented to unlimited government.

McCain had no clear plans, indeed I doubt he has a clear thought for decades. Too bad that Obama has both.

The people chose. And that was the mistake. They should not have voted for either. It was clear that nothing good was going to come from either man.

Oddly enough both McCain and Obama had a running mate that had no idea what was happening.

Sarah probably believed the GOP platform meant something. Joe probably doesn't believe anything at all.