That was quick: reports filtering in of health care premiums for families rising $2,400 annually in reaction to today's signing of Demcare bill

Karl Denninger relays a note published just hours after the Democrats celebrated the signing of DemCare.

So I just got a call from my health insurance provider. My family rates are going up $200/month ... $2400/year per employee effective April 1st. Didn't take long after signing to get this s**t going.

So much for the "my plan will save Americans" $2500/year in Healthcare premiums... 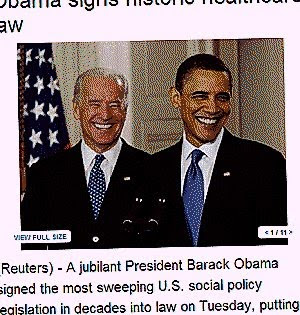 Yes, this law will induce people to hire, it will improve health access, and it will be positive for the consumer, economy, stock market and spending... [and the] market rallies on for today, as I sit back and chuckle to myself... "I told you so."

Please, buy more stocks to drive the DOW, S&P, Nasdaq and Russell higher on the mythical economic "recovery" and mythical job gains that will take hold as employers, right here and now, four full years before the "benefits" show up for adults in this bill (those very same workers) get whammied for $2,400 per year in additional costs per employee.

...One way or another the employees will be paying every single penny of that cost. Either directly through lower wages (which will do great things for consumer spending and the economy) or indirectly as people are either laid off or not hired in the first place.

Why are premiums for families certain to rise? Because of the Democrats' ham-handed attempts at social engineering, which are reminiscent of their "mortgage affordability programs". And those turned out so very well. 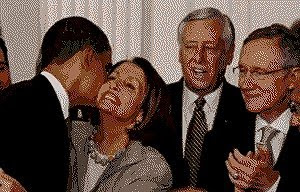 ...health experts said the proposed regulations pertaining to children will result in higher premiums for consumers. The issue of who will pay the medical costs of the nation's uninsured and underinsured children, especially those with potentially debilitating and lifelong conditions, is not yet settled.

...Tim McBride, a health economist and associate dean of public health at the Brown School at Washington University, said he expects the cost of mandating health coverage for chronically and severely ill children to be "absorbed by the health insurance companies, causing them to raise premiums.

Gee, you mean the Democrats were lying when they said if you liked your health care you could keep it? And that quality of care would improve? And prices would decline? While adding 30 to 47 million more people? Who'da thunk it?

And this news aligns with reports that small businesses are preparing for the worst. 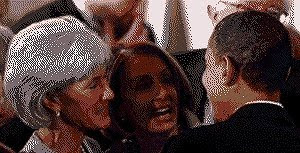 "It's going to create huge uncertainty and the potential for another downtick in the economy fed by that uncertainty," said Keith Ashmus, a partner at Frantz Ward LLP, a law firm in Cleveland. He said the bill will "almost certainly" lead to increased health insurance costs for businesses with more than 50 employees — like his.

"And it's going to result in a lot of people looking at the structure of their business to see how they can structure themselves to avoid horrendous penalties," Ashmus told FoxNews.com.

Some people never learn. We call those people "Democrats".

Here's the whole truth. The only way these demonrats are going to see the error of their ways is if Small business, and large Companies start shedding workers. That will start an avalanche. I hope it starts soon too, I'm ready to apply for some of that gubmint aid thats growing on trees...

Not sure if that would be the case or not as this mess created 159 new agencies that need people, only problem is will be that they will be filled by the unions

The new healthcare black market will be huge,ensuring unequal access for all!

Bushwack, they aren't going to see the error of their ways. Government doesn't even see any problems, they see opportunities.

The current economic crisis is one of the happiest periods in history for 99% of public employees, politicians, and lobbyists. Sure revenues are down but they are taking home more than ever.

So what if the deficit is immense, hasn't bothered them yet. So what if business are collapsing, they aren't a business.

The government still grows and the dream will never die. If only Teddy had lived to see it.

Bliss was it in that dawn to be alive, But to be a public employee was very heaven

At work, our carrier announced a 38 percent increase.

This post has been linked for the HOT5 Daily 3/24/2010, at The Unreligious Right

While you're figuring out costs, throw these thoughts into the hopper: