How come when I look up "Useful idiot" in the dictionary, I get a picture of "Professor" Alan Dershowitz? 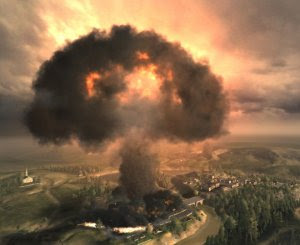 Between stints as liberal poster child, Obama shill and professional defender of Israel, Alan Dershowitz has finally found time to notice his president isn’t doing very much to stop Iran from acquiring nuclear weapons. Although that's still not enough for Dershowitz to actually criticize Obama, it has prompted him to remind his president in today's Wall Street Journal that there are dire consequences in store if he continues to play patty-cake with the Ayatollahs.

So what does the Oracle of Harvard Yard foresee should "an Iranian attack...kill as many as five million Jews" and "Israel retaliated with its own nuclear bombs" killing about 15 million Iranians?

Dershowitz doesn't say whether that perception would take hold before or after Obama's likeness is chiseled into Mt. Rushmore, but let that be a warning to you anyway, Mr. President.

When you're POTUS, there is no free lunch.

Of course, there's a more appropriate word than "Professor" you can use to describe Dershowitz: Try "putz".