Yes, Virginia, some states really do have a recall mechanism for political hacks gone bad

Yes, Virginia, it may be possible to recall your Congressional representative.

The state of New Jersey provides in Article 1 Section 2b of its Constitution that: 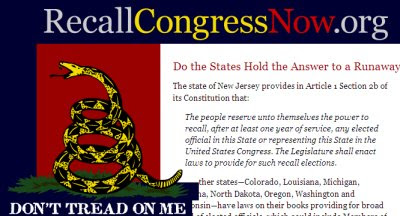 The people reserve unto themselves the power to recall, after at least one year of service, any elected official in this State or representing this State in the United States Congress. The Legislature shall enact laws to provide for such recall elections.

Eight other states—Colorado, Louisiana, Michigan, Montana, North Dakota, Oregon, Washington and Wisconsin—have laws on their books providing for broad recall of elected officials, which could include Members of Congress. Altogether, these nine states have 12 incumbent Senators in the runaway Congressional majority who are not already standing for re-election in 2010, but, in the event of successful petition drives, could be.

Give it a look-see. The current rush to socialism deserves nothing less.

THANK YOU FOR POSTING THIS!!!!