1. THEY EXEMPTED THEMSELVES    You read that right. ObamaCare is so wonderful, so Utopian, so amazing, that Democrats in Congress exempted themselves, their families, their staff members and the President's clan from having to wait in line under socialized medicine. 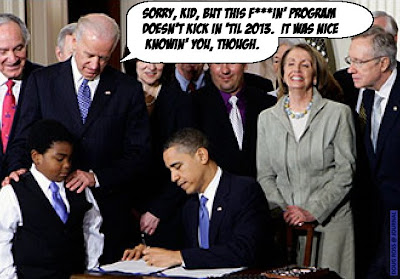 2. THE 'BENEFITS' OF DEMCARE DON'T START UNTIL 2014    To postpone the wonderfulness until after the 2012 presidential election, Democrats purposefully delayed health care spending until 2013 and 2014. Every day, Democrats told us, 35,000 people lost their health insurance (primarily because they lost their jobs under the Obamaconomy, but I digress). So these people remain screwed.

And you know those sickly child props the Democrats rolled onstage like a Jerry Lewis telethon to pitch DemCare?

Sorry, kids. You've got as much of a chance of getting covered under DemCare as Michael Moore has of getting his own Jenny Craig commercial.

But, Melvin, it's so historic.

But it's for the children! At least, those who make it to 2014. Hey kid, you got something to live for: ObamaCare!

1) The child in question is an advocate for health reform because his mother died after her insurance company rescinded her coverage
2) The bill stops pre-existing conditions for children right away, as soon as it is signed. In fact lots of the bill goes into effect right away, the only thing that doesn't kick in until 2014 in adult pre-existing in order to allow time for a boost in medicaid benefits.