Consumer Indexes has the play-by-play on the Obamaconomy. 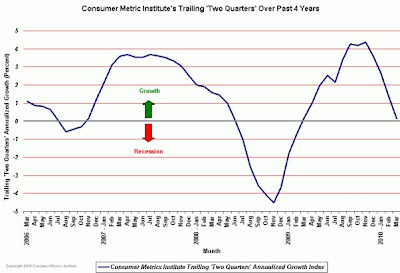 [Growth] had been dropping precipitously in part because of a sudden and significant weakening of our [composite index], which reached a level reflecting a 4.8% year-over-year contraction on February 27th. This was the lowest level recorded for the index since the middle of November, 2008. Although every one of our ten sector indexes weakened over the prior 10 days, our Housing Index retreated the most, again reaching readings representing a 9.5% year-over-year decline in consumer demand.

I blame Bush. Or Millard Fillmore. Or... anyone but the current tenant in the White House, who couldn't possibly be to blame, since he's not Bush.