Obama spells out his 13 demands for Israel

No dictator, no tyrant, no terrorist is too radical for Barack Obama to embrace and appease. But when it comes to America's most steadfast ally in the Middle East?

...Obama had listed 13 demands, or 'expectations,' of Netanyahu [which] included: A two-year deadline to the peace negotiations from the moment they begin, and a mechanism which guarantees Israel will not build in Arab neighbourhoods of East Jerusalem. 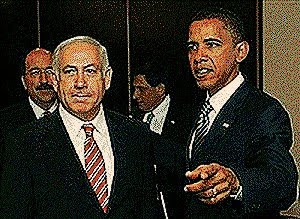 The Israeli military should stop operating in Palestinian autonomous areas, withdrawing to the September 2000 lines used before the second Palestinian uprising, when the Palestinians had full security control over their largest West Bank population centres.

In addition, Netanyahu should take more confidence-building steps, including the release of up to 1,000 Palestinian prisoners, said the official.

...In a break from protocol amid the crisis between the two allies, no handshake photo opportunity was held before the White House meeting, nor were statements made to the media.

Oh. And, gee, this comes as a surprise. 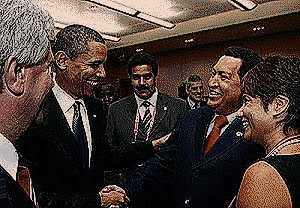 The U.S. has backed away from pursuing a number of tough measures against Iran in order to win support from Russia and China for a new United Nations Security Council resolution on sanctions, according to people familiar with the matter.

Among provisions removed from the original draft resolution the U.S. sent to key allies last month were sanctions aimed at choking off Tehran's access to international banking services and capital markets, and closing international airspace and waters to Iran's national air cargo and shipping lines...

An unbiased observer could come to no other conclusion that this President wants to see Israel destroyed.

at 6:52 PM
Email ThisBlogThis!Share to TwitterShare to FacebookShare to Pinterest
Labels: extremism, War

gee, ain't it funny how all this -- the pandering to chavez and iran, the screwing of israel, the chicago way tactics -- was predicted by the moronic neanderthal neocon rightwingnut extremists?

all those self-styled althouse-like centrists told us we were simpletons who were over-reacting, making mountains out of molehills.

now they ARE surprised.

they should all apologize to joe the plumber.

I don't get it. Obama keeps saying America is not going to tell other countries what to do...but when it comes to Israel he is all orders.

He has treated Israel abominably.

No Reliapundit. They still aren't surprised. Like those suffering from Stockholm Syndrome, they've grown accustom to seeing Obama as the ultimate good. If Obama deems it so, it must be so!

Thankfully, the Israeli left is even behind Bibi this time. It ain't like '93 and Oslo anymore. The Thug-in-Chief will lose this one.

If a confessed muslim had been elected President would he be doing anything differently? I think not.

Bibi is about the only man that could lead Israel through the "Obama/Left Wing" period here in the States. "Hold on Bibi. We're working on fixing that little problem."

Valerie Jarrett is the key to understanding everything about this. She's Iranian, peeps. Duh.

She's the key to understanding everything about Obama. I am so tired of her getting an "under the radar" pass all the time.

Or an observer might conclude that Obama is trying to de-escalate the situation.

Having read Martin van Creveld, who is an Israeli professor, I think Israel needs to win on the moral level. Appearing to pick fights and seize land is not the way to do that, even it is clearly others faults that is not obvious. Others see an assumption that Israel does not have to treat any nation as equals. Muslims know Israel could nuke the Kaaba. But Muslims know they can not do anything about Israel's nukes, and that Israel holds a trump card.