How Do You Say "Crappy Health Care" in Canadian?

Nahanni points us to a first-person account of the Canadian health care system written by a Times of London correspondent. Visiting Quebec, a friend's young son had his leg severely slashed in a boating accident. An ambulance showed up quickly, the young lad was bandaged up, and off to the E.R. they went.

...nothing can prepare you for the yawning chasm of time that passes in Canada before the healthcare system actually does any healthcare.

It didn’t seem desperately busy. One woman had lost her face somehow — probably a bear attack — and one kid appeared to have taken rather too much ecstasy, but there were no more than a dozen people in the waiting room. And no one was gouting arterial blood all over the walls. 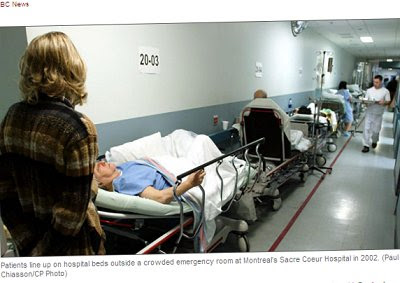 After a couple of hours, I asked the receptionist how long it might be before a doctor came. In a Wal-Mart, it’s quite quaint to be served by a fat, gum-chewing teenager who claims not to understand what you’re saying, but in a hospital it’s annoying. Resisting the temptation to explain that the Marquis de Montcalm lost and that it’s time to get over it, I went back to the boy’s cubicle, which he was sharing with a young Muslim couple.

A doctor came in and said to them: “You’ve had a miscarriage,” and then turned to go. Understandably, the poor girl was very upset and asked if the doctor was sure.

“Look, we’ve done a scan and there’s nothing in there,” she said, in perhaps the worst example of a bedside manner I’ve ever seen.

“Is anyone coming to look at my son?” asked my friend politely. “Quoi?” said the haughty doctor, who had suddenly forgotten how to speak English. “Je ne comprends pas.” And with that, she was gone.

At midnight, a young man who had been brought up on a diet of American music, American movies and very obviously American food, arrived to say, in French, that the doctors were changing shift and a new one would be along as soon as possible.

By then, it was one in the morning and my legs were becoming weary. This is because the hospital had no chairs for relatives and friends. It’s not a lack of funds, plainly. Because they had enough money to paint a yellow line on the road nine yards from the front door, beyond which you were able to smoke.

And they also had the cash to employ an army of people to slam the door in your face if you poked your head into the inner sanctum to ask how much longer the wait might be. Sixteen hours is apparently the norm. Unless you want a scan. Then it’s 22 months.

At about 1.30am a doctor arrived. Boy, he was a piece of work. He couldn’t have been more rude if I’d been General Wolfe. He removed the bandages like they were the packaging on a disposable razor, looked at the wound, which was horrific, and said to my friend: “Is it cash or credit card?”

This seemed odd in a country with no private care, but it turns out they charge non-Canadians precisely what they would charge the government if the patient were Céline Dion. The bill was C$300 (about £170).

The doctor vanished, but he hadn’t bothered to reapply the boy’s bandages, which meant the little lad was left with nothing to look at except his own thigh bone. An hour later, the painkillers arrived.

Seven hours after the accident, in a country widely touted to be the safest and best in the world, he applied 16 stitches that couldn’t have been less neat if he’d done them on a battlefield, with twigs...

Rumor has it that Stephen King's next novel will feature the Canadian health care system though, if Obamacare passes, the setting could easily be your local hospital.

I stopped reading King years ago-his constant snide remarks all of his characters were making about GW and Christians became too much to over look-besides, damn his writing really got gaseous and hardly the least bit creepy
MM

BTW, just got hooked on your site about 2 or 3 weeks ago and you rock dude