Tom Coburn to House Democrats: If Your Votes Got Bought By Pelosi, I Will Hunt You Down, Strap You to Anthills, and Cover You With Honey

SEN. TOM COBURN (R), OKLAHOMA: I want to send a couple of messages to my colleagues in the House. 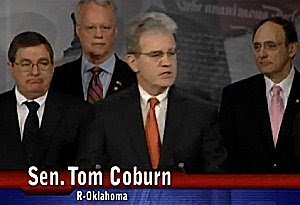 If you voted no and [now] you vote yes, and you lose your election [in November], and you think any nomination to a federal position isn't going to be held in the Senate, I've got news for you. It's going to be held.

Number two is, if you get a deal, a parochial deal for you or your district, I've already instructed my staff and the staff of seven other senators that we will look at every appropriations bill, at every level, at every instance, and we will outline it by district, and we will associate that with the buying of your vote. So, if you think you can cut a deal now, and it not come out until after the election, I want to tell you that isn't going to happen. And be prepared to defend selling your vote in the House.

You've still got time to order a welcome-back present for your local Democrat representative.


Update: Sister Toldjah points us to this:

From The NRCC’s Code Red:

...HumanEvents.com: "Most interesting rumor from the Hill yesterday: Rep. Bart Gordon (D-Tenn.) who announced his retirement from Congress has been promised the job of NASA administrator in exchange for his vote, and Rep. John Tanner (D-Tenn.), another retiring Democrat, has been promised an appointment as U.S. Ambassador to NATO in exchange for his vote. It will be interesting to note any job announcements from this Tennessee duo post-House retirement. Both voted against passage of the House bill back in November."

(Though it's about time the GOP got some backbone...!)