[The show] featured a single woman covered from head to toe in black, declaiming traditional Arabic poetry from a podium [and] the judging panel consists of five sober-looking men with bushy moustaches, and a similarly all-male audience. 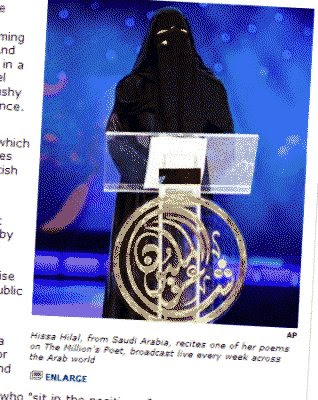 ...Tonight, Hissa Hilal, a mother-of-four from Saudi Arabia, takes to the stage in the last round of a competition that she has taken by storm with a scathing critique of the conservative clerics who hold sway in her country. Her poetry has earned her the praise of the judges, the acclaim of the viewing public – and more than a few death threats.

Ms Hilal earned her place in the final with a performance last week, which was seen as a response to a prominent Saudi cleric's call for those who advocated the mingling of men and women to be punished with death. In a 15-verse work, she railed against preachers who "sit in the position of power", "frightening" people with their religious edicts.

"I have seen evil in the eyes of fatwas, at a time when the permitted is being twisted into the forbidden," she said, with only her microphone and her eyes visible against the uniform black of her burqa. The clerics, she went on – and, by extension, suicide bombers who wrap explosives around their waists – "are vicious in voice, barbaric, angry and blind, wearing death as a robe cinched with a belt".

It was a bold message indeed, and in Saudi Arabia, where unmarried men and women are entirely segregated, a highly controversial one. But when she finished, the ranks of men listening erupted into cheers, and the judges sent her into today's final with compliments ringing in her ears.

"Hissa Hilal is a courageous poet," said Sultan al-Amimi, one of the show's judges. He praised her for "expressing her opinion" and "raising an alarm" against extremist clerics.

Ms Hilal herself, meanwhile, is uncompromising in the face of the threats that have emerged on militant websites. "My poetry has always been provocative," she told the Associated Press. "It's a way to express myself and give voice to Arab women, silenced by those who knock our culture and our religion..."

The lady's got some brass. She deserves the Western world's support.

at 7:14 PM
Email ThisBlogThis!Share to TwitterShare to FacebookShare to Pinterest
Labels: extremism, World

if it's even a true story, what did she say about "soft line Islamic sharia law"?

here's what she said:

"It's a way to express myself and give voice to Arab women, silenced by those who knock our culture and our religion."

yeaaaahhh - a moderate muslim...let's back her in the Western world