• New Jersey spends $11 billion more annually than it takes in -- the largest percentage deficit in the U.S. 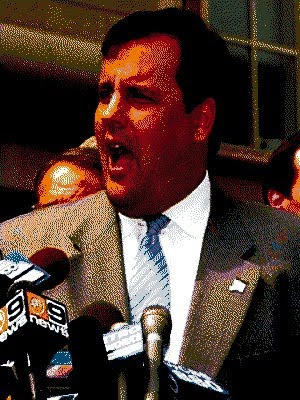 • New Jersey's total debt has tripled since 2002, skyrocketing from $17 billion to $51 billion. Each family of four living in New Jersey is therefore on the hook for more than $16,000.

• And in the midst of the worst economic downturn since the Great Depression, New Jersey's public sector added 11,300 jobs in 2009 while private enterprise hemorrhaged 121,000 jobs.

Sanity: Governor Chris Christie is amputating large portions of the budget. Because it's the only way.

• His proposed budget would slash subsidies to schools by $800 million and to cities and towns by $450 million.

• It would reduce state spending by nearly 10%.

• It would permanently cut more than 1,200 state employees.

• It would suspend payments of billions on the insanely rich public sector pension plans that can't possibly be sustained.

The only question: can we clone Chris Christie, say, 534 times for Washington?

IMO NJ cannot simply make a few adjustments and, tinker a little with taxes, and muddle though.


Christie sees that anything less than a major overhaul of NJ government is certain to fail.

That will require big cuts in both revenues and spending. And an end to the era of unlimited government promises.

His political opponents hope to keep the wreck running a little longer. For tomorrow is another day.

Christie probably won't make much progress. The public unions and other special interests will keeping using creative accounting and propaganda until those utterly fail.

Then they will announce they are the party of change and reform.

Say, I've got an idea: how about insisting that if your locality wants to have a government of some sort, whether it be a city council, a county legislature, or a disctrict school board, it has to raise all its own revenue, without help from some "higher power?" God excepted, of course.

Governor Christie is indeed a brave man. But he'd leap to the pantheon of political gods if he were to zero out "aid" to cities, counties, school districts, corner lemonade stands, and so on. No politician has shown that much courage since Grover Cleveland.