Democrats libel 'Kill the Bill' crowd as racist, violent crackpots when 99.99% are patriots concerned with the evisceration of the Constitution And the author somehow takes offense at this Hitler analogy for President Obama. 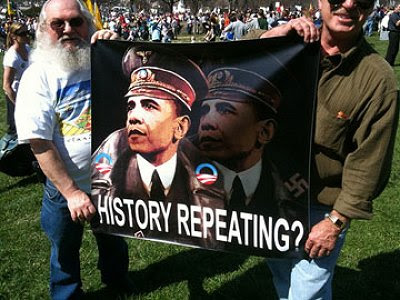 Gee, after every Democrat in the country alluded to Bush as a Nazi or approved of the representation, this seems a bit -- how you say? -- hypocritical. For just a small taste, do a search on "Bushitler". 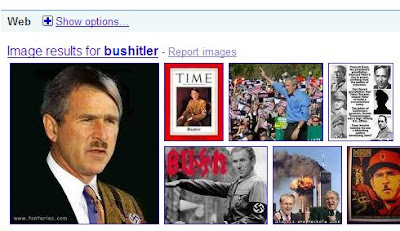 Seems a tad curious that Stink Progress is complaining when, in fact, the Democrat Party is orchestrating a government takeover of a full 48% of the economy (health care, the banks, AIG, GM, Chrysler, the student loan business...).

Meanwhile, The Huffington Post breathlessly reported an anecdote that made it appear Tea Partiers are racists -- without audio, video or even named attribution.

A staffer for Rep. James Clyburn (D-S.C.) told reporters that Rep. Emanuel Cleaver (D-Mo.) had been spat on by a protestor. Rep. John Lewis (D-Ga.), a hero of the civil rights movement, was called a 'ni--er.' And Rep. Barney Frank (D-Mass.) was called a "faggot," as protesters shouted at him with deliberately lisp-y screams. Frank, approached in the halls after the president's speech, shrugged off the incident.

But Clyburn was downright incredulous, saying he had not witnessed such treatment since he was leading civil rights protests in South Carolina in the 1960s.

Of course, the last time this sort of incident happened, it turned out that the so-called racists were actually Democrat plants helpfully seeded by the SEIU. Remember this golden oldie from last year?

This screenshot was used in reports by the [media] who painted the protesters as Nazis. Here's the thing, though - that black man is a Dingell supporter! 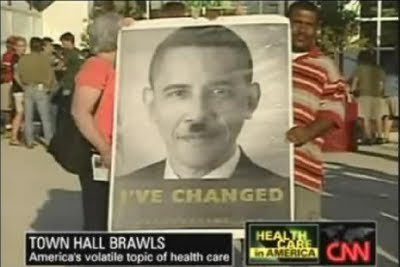 Last Friday, Frank Beckmann on his show broadcast on WJR 760 AM interviewed an eyewitness that said not only were union thugs let in through a side door before anyone else was let into the venue, but that he clearly saw from his vantage point that very Obama as Hitler poster in that back hallway after the union thugs took their seats.

So take every report of "racism" with a grain of salt.

I'll eagerly await the video to see if (a) this incident really occurred; and (b) whether the perpetrator was a union member hired for the occasion.

I call BS! Clyburn took the opportunity to have a 60's flashback and whine "racist" attack.
If there WERE any witnesses they would have kindly reminded the offended civil rights march leader guys about those amazing REPUBLICANS who supported their rights and those bad bad democrats (kkk) who voted for their oppression.
But hey, why nit pick.

Just yesterday, Clyburn showed his encyclopedic ignorance about the ObamaCare bill and just about everything else in a long interview that the WSJ showcased on "Best of the Web." Besides having a room-temp IQ, Clyburn is a liar.

If these incidets actually happened I'm willing to bet they were perpetrated by agents provocateur.

A blogger named "Archpundit" purports to have incriminating video. It's not all that convincing to me, but here's the link for what it's worth:

Is anyone surprised? The mili-second I heard that Frank was called a faggot and the civil rights leader was called the "N" word I knew something was up. My first reaction was that it was a setup so they could pull out the "victim" cards as a last resort for their shameful lack of representing their constituents.

Please, don't call the BLACK RACISTS of the Congressional BLACK caucus names. Just because only one race is allowed to join their little club does not mean there racist. That would only apply to whites if they had their own little club where only one race could join. Since this crew is in love with Castro's Cuba, TRAITOR would have been more in line with the issues at hand.

It is statist agi-prop, plain and simple.

Dr. Carol Swain, a black American academic at Vanderbilt University stated she believed those who shouted those racist and other comments were left wingers doing what Saul Alinsky advocated in his "Rules for Radicals" book, to infiltrate the opposition and make them look bad.