But not in a good way.

US 'may not veto UN resolution on Jerusalem'

Israel considers areas within the Jerusalem municipality as its territory

The US is considering abstaining from a possible UN Security Council resolution against Israeli settlements in East Jerusalem, sources suggest to the BBC. 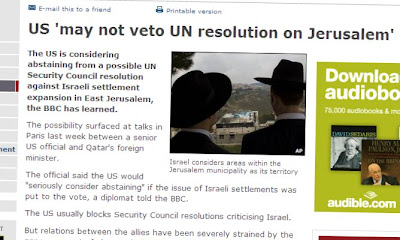 The possibility surfaced at talks in Paris last week between a senior US official and Qatar's foreign minister... The official said the US would "seriously consider abstaining" if the issue of Israeli settlements was put to the vote, a diplomat told the BBC.

The US usually blocks Security Council resolutions criticising Israel... But relations between the allies have been severely strained by the announcement of plans to build 1,600 homes in an East Jerusalem settlement during a recent visit to Israel by US Vice-President Joe Biden.

The move prompted the Palestinians to pull out of the US-brokered indirect "proximity talks" that had only just been agreed in a bid to revive the peace process, which has been stalled for more than a year.

Can anyone tell me why this administration treats dictators, thugs and tyrants better than our allies?

at 9:03 PM
Email ThisBlogThis!Share to TwitterShare to FacebookShare to Pinterest
Labels: Obama, World

Hope that's good enough of an explanation, because nothing else seems to fit.

It would be interesting to know what is on the minds of the people who chased me away from "Jewish"[1] blogs because I argued that Obama was their enemy.

[1] I didn't know they were "Jewish" blogs when I started reading them--they were just among the many blogs that had something interesting to say about something I was interested in.

No. I don't remeber the names of them--if I did I'd go look m self.

Being anti-American means being pro-tyrrany, so dictators, thugs, and tyrants are his natural allies. president hussein is the same in the rest of world as was in chicago...