Where's TOTUS when you need him? Baier shreds President Obama on Government-run Health Care and the Shady Deals Used to Buy Off Democrats 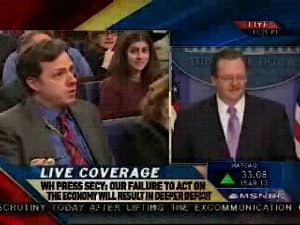 White House officials once again advanced its contention that Fox News and its commentators are not journalists, rather a propaganda wing of the Republican Party...

Well, the non-news organization hosted an exclusive sit-down with the President this afternoon, mainly because its competitors have lower ratings than the "Tumble-Dry" setting at the laundromat.

And President Obama did some of his best fibbing ever, which is really saying something. Bill Clinton and Dick Nixon look like rank amateurs compared to #44.

BAIER: ...do you support the use of this Slaughter rule? The deem and pass rule, so that Democrats avoid a straight up or down vote on the Senate bill? 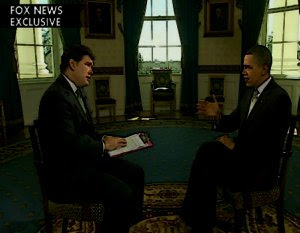 OBAMA: ...We know that this is going to reduce the deficit by over a trillion dollars. [FAIL.] So you've got a good package, in terms of substance. [FAIL.] I don't spend a lot of time worrying about what the procedural rules are in the House or the Senate. [So you worry about due process for terrorists, but when it comes to following the very simple Constitutional requirements for passing a law, it's just "procedural". Got it. Perhaps the GOP will change the rules of impeachment and call it a "procedural" matter.]

BAIER: ...We asked our viewers to e-mail in suggested questions and [one question was] 'If the bill is so good for all of us, why all the intimidation, arm twisting, seedy deals, and parliamentary trickery necessary to pass a bill, when you have an overwhelming majority in both houses and the presidency?'

OBAMA: ...The key is to make sure that we vote — we have a vote on whether or not we're going to maintain the status quo, or whether we're going to reform the system. [In other words, shut up -- because we're about to get the Democrats' wet dream: complete control over you, your body, your well-being and all of your private health care information. We'll be able to reward allies and punish enemies. Because this is about power. By any means necessary, we're going to pass this bill.]

OBAMA: My understanding is that whatever is going to be done on Medicare is going to apply across the board to all states.

BAIER: Connecticut, Montana — there are a lot of deals in here, Mr. President, that people have issues about. 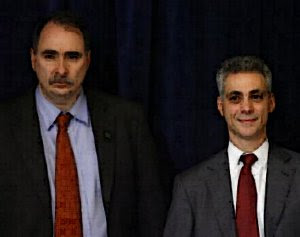 BAIER: ...You said a few times as Senator Obama that if a president has to eke out a victory of 50 plus one, that on something as important as health care, "you can't govern." But now you're embracing a 50 plus one reconciliation process in the Senate, so do you feel like you can govern after this? ...Deem and passed, Senate reconciliation and we don't know exactly what's in the fix bill...

OBAMA: ...Now, you keep on repeating the notion that it's one-sixth of the economy. Yes, it's one-sixth of the economy, but we're not transforming one-sixth of the economy all in one fell swoop. [FAIL.] What we're saying is is that for the vast majority of people who have health care, they're going to be able to keep it. But what we are saying is that we should have some basic protections from insurance company abuses and that in order for us to do that, we are going to have to make some changes in the status quo that we've been debating for a year. [FAIL - it's complete government control, which is certain to drive doctors out of their practices and bankrupt private insurers. Guaranteed]

BAIER: Mr. President, you couldn't tell me what the special deals are that are in or not today.

OBAMA: I just told you what was in and what was not in.

BAIER: Is Connecticut in?

OBAMA: Connecticut — what are you specifically referring to?

BAIER: The $100 million for the hospital? Is Montana in for the asbestos program? Is — you know, listen, there are people — this is real money, people are worried about this stuff.

OBAMA: And as I said before, this — the final provisions are going to be posted for many days before this thing passes, but — [FAIL.]

BAIER: ...The CBO has said specifically that the $500 billion that you say that you're going to save from Medicare is not being spent in Medicare. That this bill spends it elsewhere outside of Medicare. So you can't have both... You either spend it on expenditures or you make Medicare more solvent. So which is it?

OBAMA: Here's what it does. On the one hand what you're doing is you're eliminating insurance subsidies within Medicare that aren't making anybody healthier but are fattening the profits of insurance companies [FAIL]... The key is that this proposal doesn't weaken Medicare [FAIL], it makes it stronger for seniors currently who are receiving it [FAIL]...

And ten-to-one David Axelrod was cooking up a new excuse to leak to the legacy media ("How's this -- 'the President had a fever, that's why his performance wasn't top-notch' ?")

It is amazing to watch him squirm.

It is the typical activist way of answering questions - flat out lies disguised in pretty terms. Only this time it didn't come off.

He KNOWS full well he is lying. He knows we know it. He knows he is not qualified for the job he won, he knows he is a pretender, that's why the nastiness comes out. It's defensive.

How on earth would Obama know what's good for small business? He's been living off the taxpayer dime for the vast majority of his adult life.

Good job, Bret. You came close to an "It's not illegal if the President does it!" moment. If only you had more time.

wave42, I can't add anything better to that comment.
He is a jack of some information and master of no skill, short of reading a teleprompter.