I think I recognize Tata's public relations people from their work on Coke Classic. It appears this photo hit every newspaper in the world north of the Ross Ice Shelf (no relation). 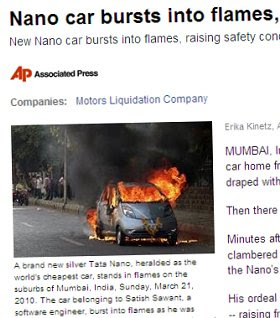 Satish Sawant was proudly driving his first car home from the showroom: A brand-new silver Tata Nano, draped with a celebratory garland of marigolds.

Minutes after the software engineer's wife and five-year-old son clambered out of the back seat, smoke from the engine, located in the Nano's rear, erupted into flames that engulfed the tiny car.

His ordeal showed just the latest problem with the low-cost Nano -- raising fresh questions about safety and quality as top Indian carmaker Tata Motors sets its sights on global expansion and aims to ramp up production of the Nano with a new factory next month.

...Starting around $2,500, the Nano has been heralded as the world's cheapest car, and was meant to usher in a safety revolution, which would get millions of families off dangerous motorbikes and into the cool comfort of an affordable car.

Tata Motors, which also owns Jaguar and Land Rover, plans to start selling versions of the Nano in Europe in 2011, and later, in America.

Oooh, I want one. I haven't had a good barbecue in a while!

How much did he have to pay for the carbon emitted burning or does the portable BBQ come with carbon credits?