Knowing what we know now, will President Obama resurrect the need for a 'Civilian National Security Force' if Democrats retain power in November?

A week ago, Rep. Michele Bachmann (R-MN) pointed out that rating agencies were growing increasingly concerned with the United States' fiscal outlook.

More dismal news regarding our country’s fiscal standing was released yesterday by Moody’s Investors Service... ...the cost of servicing our debt is raising, therefore the United States has been brought "substantially" closer to losing our AAA, or highest level, credit rating.

"Under the ratings company’s so-called baseline scenario, the U.S. will spend more on debt service as a percentage of revenue this year than any other top-rated country except the U.K., and will be the biggest spender from 2011 to 2013."

...Before the State of the Union address, President Obama called for a freeze in discretionary spending. However, the budget for fiscal year 2011 he sent to Congress days later forecasts a record-breaking deficit of $1.6 trillion. Congress also recently voted to raise our country’s debt limit by $1.9 trillion to an astounding $14 trillion. These examples do not speak to fiscal restraint.

Despite these warnings, the irresponsible leaders of the Democrat Party ignored the will of the people yesterday and nationalized the health care system. Bachmann notes that the federal government now owns or controls about half of the entire U.S. economy

[They have] taken over Freddie, Fannie, Chrysler, GM, banks, AIG, student loans ... with this 18 percent [the health care system], that brings it up to 48 percent [of the private economy] that the federal government owns or controls. ... And they are not done.

No, they are not.

As oil prices inevitably rise -- thanks to the no-drill, no-refine policies of the Democrat Party -- the bureaucrats in Washington will ram through carbon taxes, cap-and-trade, "smart grids" and other "green" scams to confiscate more and more of your private property. As a result, they will control the production, delivery and use of all energy in the U.S. 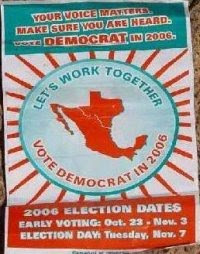 That catch-phrase simply means that our borders will remain unsecured; our new, redistributive health, welfare and social services programs will incent new waves of illegal immigration; and Democrats will get the desired result: millions of new voters. And none of these illegals will have learned about or bought into our culture, our Constitution, our way of life, our language or anything else that contributes to a cohesive environment.

Not to be outdone, other liberals are working to restore the vote to the criminal population, another desirable Democrat demographic.

Near as I can figure it, the Democrat Party is actively working to destroy the American civil society. It appears to serve the interests of only the union bosses, the trial lawyers, government bureaucrats, illegal immigrants and felons. In other words, Democrats.

And, in the context of recent events, is it worth reconsidering the President's bizarre remarks last year regarding internal national security?

This was not the first time Obama expressed a desire for a powerful internal national security force. As a candidate in July 2008, Obama first enunciated the need. 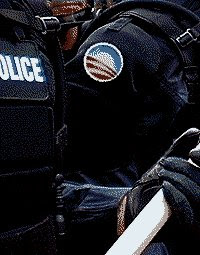 With the takeover of the health care sector, as Bachmann points out, Barack Obama has nationalized nearly half of the entire U.S. economy. Fourteen months ago, who would have thought such a thing possible?

And, if Democrats would retain control of Congress in November, is there any doubt that talk of an immediate need for a "Civilian National Security Force" would resurface?

Say, just to "preserve order" after the Acorn-types employed their usual tactics and flooded the system with absentee ballots.

To preserve this Republic, we are counting on you to marshal your neighbors, your friends and your families to help defeat the evil that the modern Democrat Party has become.

For, as Thomas Sowell has observed, November 2010 may well be "the point of no return."

The article makes me think it's a good time to pull this one from the not too distant past. We must not forget who we are dealing with.

However, Americans have the U.S. military on their side. Kind of a trump card in the hole.

Talk about your local thuggery...

Just swear them in, and there you go.