What this reform does is build on the system of private health insurance that we already have. So does that mean that it’s going to solve every health care problem that we have? No. But it finally tells -- oops, it looks like somebody may have fainted. That happens sometimes in the crowd. Just give him some space. If the medics can make sure to check on them, in the meantime just make sure that they’ve got some air. And if anybody has some water down there, that’d be great. They’ll be all right. 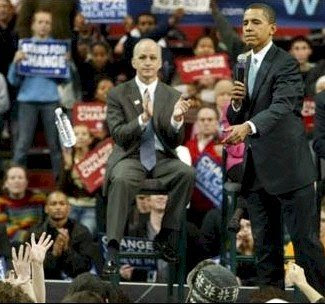 At the Obama speech in Midtown today I saw what I thought was quite the telling characteristic about him. Someone fainted in the crowd of thousands and Obama stopped mid sentence and calmly pointed it out to the paramedics. He and his wife even tossed their bottles of water to the people helping this person. On top of that, Obama didn't start speaking again until that person was alright. He gave an excellent speech but that one action said a lot more about him and his priorities.

My favorite moment was how very cool and collected Obama was when someone fainted in the heat. He was so gracious, noticed immediately that people were calling for help, asked people to clear the way for the EMTs. What made it a great moment, was that he asked, "And if someone has some water ... Wait, I might have some back here." He proceeded to go get a bottle from behind the podium and pass it back.

So like while I was at tonight’s “Get Out The Vote Rally” featuring BO, at roughly 6:55, about 30 minutes into his speech, guess what happens? Someone faints. I hadn’t heard about this happening in a while, at least not since there had been quite a bit of discussion in the blogosphere a couple months ago about all the fainting episodes, and how they all seemed so strangely similar. Well, add another one to the list.

"Climate change, the Iraq war and Obama tossing a bottle of water to a woman about to faint all received big cheers," MSNBC.com reported. "As Obama told the crowd to part so that the woman in question could leave and called for help, a young girl in the crowd shouted out, 'What a man!' The audience roared with laughter (although the press that has seen this happen before rolled its eyes)."

And when a woman appeared to faint in the standing-only VIP section in front of the podium, Obama paused his speech for over a minute as he directed the crowd to make way for an EMT team and tossed a bottle of water from the stage," reported the Yale Daily News.

"Barack Obama's first and only rally on election day came to a sudden and lengthy stop when a young woman in the Dartmouth College gym fainted, and was eventually rolled off on a gurney by emergency medical technicians," the Los Angeles Times reported. "At first Obama half-narrated the episode, saying soothing things like, 'She's OK,' 'She's talking.' But the longer she lay on the floor, the quieter Obama got, standing on the podium, arms folded, looking worried as the medical crew worked." Minneapolis's WCCO-TV has video showing Obama handing a bottle of water to the Dartmouth damsel in distress.

Someone fainted in the audience as Obama was giving his speech about change. Paramedics had to come in and rescue someone in the stands.

"This excitement mirrored the aura in the room that grew throughout his speech," reported WISN-TV. "Before the senator arrived, students were tossing around an inflatable cow above the crowd. Three people fainted in the midst of all the enthusiasm."

A woman standing in front of the stage appeared to faint as Obama spoke about Iraq," the Associated Press reported. "The candidate paused and asked the crowd to make way for firefighters. One supporter shouted, 'You're a good man,' leaving Obama momentarily at a loss for words. 'Well, I'm not the only one stopping to help her,' he said, sounding almost embarrassed."

"The beginning [of his speeches] is slow and halting. Gradually be warms up when the spiritual atmosphere of the great crowd is engendered. For he responds to this metaphysical contact in such a way that each member of the multitude feels bound to him by an individual link of sympathy."

All of our informants report the slow start, waiting for the feel of the audience. As soon as he has found it, the tempo increases in smooth rhythm and volume until he is shouting at the climax. Through all this, the listener seems to identify himself with Hitler' s voice which becomes the voice of Germany.

This is all in keeping with Hitler's own conception of mass psychology as given in MEIN KAMPF where he says:

"The psyche of the broad masses does not respond to anything weak or half-way. Like a woman, whose spiritual sensitiveness is determined less by abstract reason than by an indefinable emotional longing for fulfilling power and who, for that reason, prefers to submit to the strong rather than the weakling - the mass, too, prefers the ruler to a pleader."

And Hitler let them have it. NEWSWEEK (572) reported:

"Women faint, when, with face purpled and contorted with effort, he blows forth his magic oratory."

at 11:43 AM
Email ThisBlogThis!Share to TwitterShare to FacebookShare to Pinterest
Labels: Democrats, Obama

why is he always so sure they'll be okay? how does he know its not a fatal heart attack? what a fraud.

The difference between Obama and Jesus is that Jesus could raise a dead body after 4 days in the grave and His own after 3. Obama talks for 4 minutes and they start dropping like flies, and one hopes the ambulances get there in 3 minutes.

He knows they'll be okay because the fainting is staged.