Beautiful: SEIU organizing rally for illegal immigration on 3/21 in DC

As if they haven't wrought enough damage, the Service Employees International Union (SEIU) -- whose agenda appears to be bankrupting the U.S. -- is organizing a rally in favor of illegal immigration. Gee, I'm sure all of their dues-paying members are ecstatic. Check this pitch out:

Today we are at a pivotal moment in the history of this nation. We are faced with a choice. We can do nothing, and watch as new American families are torn apart by the broken immigration system; watch as profiteers continue to take advantage of people desperate for work [Ed: Got Communism?]; and watch as all American families struggle to find good jobs and make ends meet. Or we can stand up, and stand together for our families and our communities. Join thousands from across the country at the March for America in Washington on March 21st. Itis [sic] up to us to make sure that campaign trail promises are turned into real policies that help lift all American families in 2010. [Ed: So dumbing down citizenship will help our economy? That's kinda like socialized medicine reducing costs and increasing quality.] 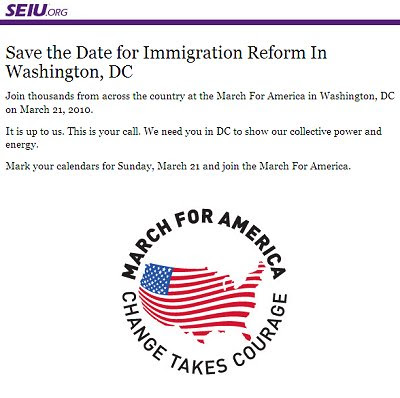 Every day that Washington fails to address our broken immigration system and broken economy, Americans become more angry and frustrated with their leaders. Every day that we put off reforming the immigration system more families are torn apart, workers endure more abuse, our national deficit grows as billions in tax revenue are lost, and the rule of law is undermined...

This is the right moment for Congress to show it can pass bipartisan legislation by fixing the broken immigration system and fixing the economy... Comprehensive immigration reform [Ed: i.e., amnesty] is such a solution. It will strengthen our families, improve conditions and wages for all workers, make America safer, ensure all workers and all employers are paying their fair share of taxes, and add well over a trillion dollars to our economy. [Ed: Can't breathe. Laughing too hard. Hode on. Cheezus.]

Our values as a nation demand economic fairness for everyone and citizenship rights and obligations for all who work hard to sustain our country. Our broken immigration system dishonors our notions of inclusiveness, justice and equality. Our broken economy is the product a [sic] fundamental unfairness...

Not only are these morons illiterate, they're illiterate Communists!

The public sector unions have worked out really well for the feds and the states... which is why the Democrats, who appear hellbent on destroying our country, have empowered them to set policy.

The clock's ticking. Democrats only have a few months left in which they can destroy our society. That should explain their flailing, their buying votes, promising Ambassadorships, working retirement deals, and securing secret payoffs.

Join me on the 'Impeach & Convict Tour 2011', where Democrats will learn what "Representative Government" really means.

Not the ones printed in English, anyway.