“A super-rich pal – who was closely involved with the campaign finances – is helping John. It’s likely this man doesn’t know all the dirty details of John’s extramarital affair, but is acting out of loyalty and is not asking a lot of questions – only writing the checks,” revealed a source very close to the situation.

How close is Baron to Edwards? In January, CreativeYouth speculated that indictments could be in the cards:

Bundler Fred Baron, a prominent attorney and friend, has provided Edwards with the use of his private private plane, a Raytheon Hawker 800. Does this in-kind donation exceed campaign finance limits?

That would be a convenient way transport a mistress and secret love child from coast to coast (would one be so inclined). 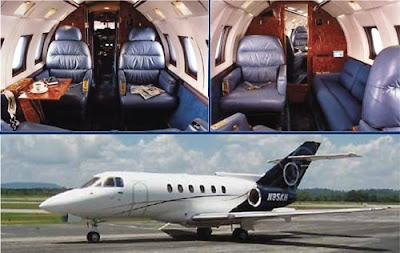 Who's Fred Baron? Only one of the most prominent trial lawyers and Democratic fundraisers in the country. 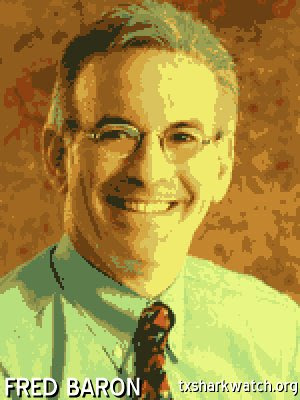 Baron has been an active figure in politics as a prominent fund-raiser for the Democratic Party and fellow trial lawyer, Sen. John Edwards. Baron was the finance chair of Edwards' 2004 presidential campaign before co-chairing the Kerry Victory '04 committee, a joint effort of the Democratic National Committee and the Presidential campaign of John Kerry. Baron gave $1.7 million to the Texas Democratic Trust in the last two years and [was] also heavily involved in Edwards's 2008 presidential campaign, moving to North Carolina to head up fundraising, and lending Edwards his Hawker 800 private jet.

Baron has joked about the prominence he and other trial lawyers have in the Democratic Party. In a July 2002 speech, he noted a Wall Street Journal editorial that said that "the plaintiffs bar is all but running the Senate." Baron pointed to the editorial and said, "Now I really, strongly disagree with that. Particularly the 'all but.'"

Baron is trustee of the Democratic National Committee... lives in the Preston Hollow neighborhood of north Dallas.

Even the progressive blogs took note of Baron:

As it turns out, most of the travel [expenditure] numbers [for the presidential candidates] are for private jet charters -- which makes sense in Obama's and Clinton's cases, since they need to be in DC frequently for their day jobs, but makes a little less sense (fiscally, environmentally) for Edwards, who seems to rent Fred Baron's jet a lot. 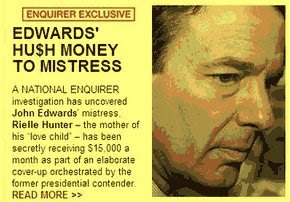 Baron made a trial lawyer watchdog site's Rogues Gallery, which states "[the] asbestos personal injury trial lawyer, has given millions in soft money to the national and state Democratic Parties."

That much remains uncertain, but with the convention approaching, the Enquirer is certain to continue leaking the story, bit-by-bit.

My over-under date for Edwards to come clean is August 24.

Update II: The Dallas Observer says the speculation about Baron was 'on the money'. So to speak.