Andrew Breitbart's Stake in the Heart


This morning, members of the mainstream media woke up all over the country fixated on a single question: What is Andrew Breitbart up to?

Before he unleashed the ACORN blockbuster, the new media superstar issued a thinly veiled warning to the denizens of the fourth estate who had ignored the Van Jones story until the point of no return. 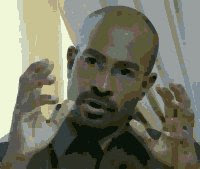 For most people in this country, the resignation was the first they had heard of Van Jones. For this sin of journalistic omission, there's institutional media blame. Bias is too tame a word for the utter shamelessness on display: Only Republican scandals - real and imagined - matter...

...the American mainstream media - ABC, NBC, CBS, the New York Times, the Washington Post, Time, Newsweek, et al - must be held to account for sitting on the sidelines as this major story kept building without them, went viral on YouTube, and then became so large that a key appointee of President Obama was forced to step down...

...Much of America has started to realize that not only was Mr. Obama not vetted before he became president, he and his fellow unvetted cohorts continue to be given a pass...

This morning, writing in The Washington Times, Breitbart offered another intriguing glimpse into his approach. 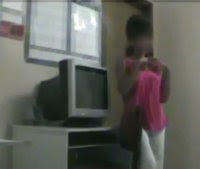 ...launching [the] compelling and stylized [ACORN] videos, we needed to offer the full transcripts and audio to the public in the name of transparency, and to offer Fox News the full footage of each video before each was released. We had to devise a plan that would force the media to see the evidence before they had enough time to destroy these two idealistic 20-something truth seekers. Mr. O'Keefe agreed to post the full audio and full transcript of his video experiences at BigGovernment.com... Thus was born a multimedia, multiplatform strategy designed to force the reluctant hands of ABC, CBS, NBC, the New York Times and The Washington Post.

In an interview with Megyn Kelly on Fox News, Breitbart explained his rationale.

Accuracy in Media's K. Daniel Glover asserts that Breitbart's plan is "to force the mainstream media to report the news."

I disagree. I believe Breitbart aims to put a stake the heart of the mainstream media's bellwether: The New York Times.

Lorie Byrd at Wizbang has an eerily similar take:

If you follow all the links above and track the story as it has evolved, you will see that there was plenty of "there" there and there has been plenty of time for the national media to pick up on it. Yet most in the mainstream media ignored it.

Consider Breitbart's careful staging of the ACORN story. He unpeeled the onion, layer by layer.

Each layer revealed more festering rot, more intellectual bankruptcy undergirding the mainstream media. Or, as some call it, the state-run media. 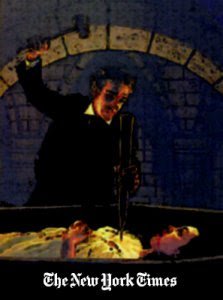 Let's walk through the thought process of a typical Times reader exposed to the second or third major story days or weeks after other outlets broke it.

1) "Despite plenty of opportunities, my newspaper refused to investigate this outrageous waste of my tax money."

2) "After someone else investigated the story and broke a major scandal, my newspaper refused to report on the story."

3) "Ergo, my newspaper is completely irrelevant."

Party affiliations and political views notwithstanding, few intelligent readers want to miss out on a series of major news stories. Yet Times' subscribers have been kept in the dark day after day, week after week, month after month.

Therefore, don't be surprised to see second half 2009 financial results for The New York Times Company described as "catastrophic."

And Andrew Breitbart's burgeoning new media empire is poised to benefit greatly. Perhaps he's the Hearst of our age.