The Los Angeles Times describes an unexpected side-effect of the real estate meltdown: debtors with high credit scores and excellent payment histories are suddenly "walking away" from their mortgages. 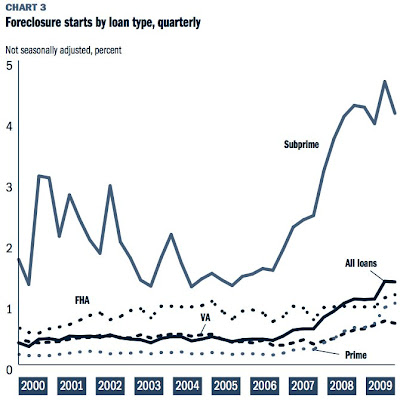 • The number of strategic defaults is far beyond most industry estimates -- 588,000 nationwide during 2008, more than double the total in 2007. They represented 18% of all serious delinquencies that extended for more than 60 days in last year's fourth quarter.

• Strategic defaulters often go straight from perfect payment histories to no mortgage payments at all. This is in stark contrast with most financially distressed borrowers, who try to keep paying on their mortgage even after they've fallen behind on other accounts.

• Strategic defaults are heavily concentrated in negative-equity markets where home values zoomed during the boom and have cratered since 2006. In California last year, the number of strategic defaults was 68 times higher than it was in 2005. In Florida it was 46 times higher. In most other parts of the country, defaults were about nine times higher in 2008 than in 2005. 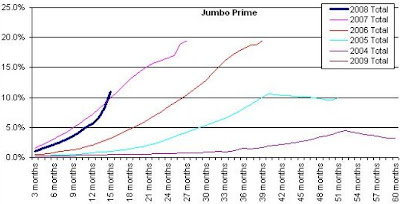 • Two-thirds of strategic defaulters have only one mortgage -- the one they're walking away from on their primary homes. Individuals who have mortgages on multiple houses also have a higher likelihood of strategic default, but researchers believe that many of these walkaways are from investment properties or second homes.

• Homeowners with large mortgage balances generally are more likely to pull the plug than those with lower balances. Similarly, people with credit ratings in the two highest categories measured by VantageScore -- a joint scoring venture created by Experian and the two other national credit bureaus, Equifax and TransUnion -- are far more likely to default strategically than people in lower score categories.

• People who default strategically and lose their houses appear to understand the consequences of what they're doing. Piyush Tantia, an Oliver Wyman partner and a principal researcher on the study, said strategic defaulters "are clearly sophisticated," based on the patterns of selective payments observable in their credit files. For example, they tend not to default on home equity lines of credit until after they bail out on their main mortgages, sometimes to draw down more cash on the equity line.

This would confirm a contention published in August by Deutsche Bank. It predicted the percentage of underwater mortgages in the U.S. will reach 48% by the first quarter of 2011.


Now combine this forecast with the fact that a negative loan-to-value (LTV -- or "underwater") mortgage is "the single most important factor" in a foreclosure, based upon a study of millions of individual loans. 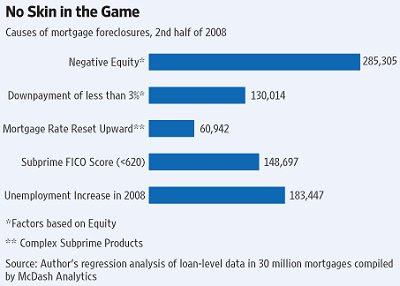 Now add in the fact that some expert observers believe that an enormous block of homes -- whose mortgages have already defaulted -- are being hidden by banks to avoid the impact of write-downs on their balance sheets.


[This] "Shadow inventory has the potential to give us another leg down on home prices during the second half of the year," said Steven Wood, chief economist at Insight Economics in Danville, California... "It appears that there is a significant amount of shadow inventory in the form of bank owned properties, which will continue to grow with the rising in delinquencies," he said...

Doctor Housing Bubble concludes, "...with those toxic Alt-A mortgages, how many homeowners are going to opt for the ridiculous modifications that basically make them lifelong renters with zero mobility? ...Summer selling season is nearing the end and we are now going into the slow selling season with shadow inventory coming into the light."

Buckle your seat belts: it would appear that a major deflationary spiral has yet to unwind.

Each foreclosure harms the prices of neighboring homes; this leads to more underwater mortgages; which, in turn, results in more foreclosures... rinse and repeat until done. And banks will have to continue hiding as much shadow inventory as possible, especially in California, to prevent a real financial crisis.

Now consider that Fannie Mae and Freddie Mac were at the epicenter of the housing meltdown, purchasing and repackaging all sorts of toxic mortgages. And Congressional Democrats continue to stonewall an investigation into those entities.

Given this outstanding track record, it's no wonder voters are so excited about the Democrats' effort to take over another one-sixth of the economy: the health care system. And it's a good thing we have such an experienced hand, with a phenomenal track record of economic achievement, serving in the White House.

Update II: "California Will not see Housing Peak until 2030."