The Incredible Ghost Fleet Off The Coast Of Singapore


London's Daily Mail offers a startling look at what it calls "the ghost fleet of the recession". With a flair for the the dramatic, the Mail calls this The biggest and most secretive gathering of ships in maritime history[, which] lies at anchor east of Singapore. Never before photographed, it is bigger than the U.S. and British navies combined but has no crew, no cargo and no destination. 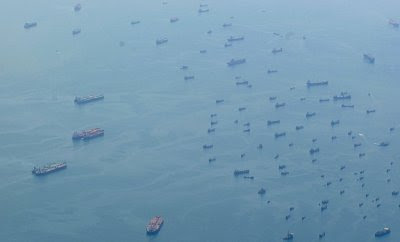 Here, on a sleepy stretch of shoreline at the far end of Asia, is surely the biggest and most secretive gathering of ships in maritime history. Their numbers are equivalent to the entire British and American navies combined; their tonnage is far greater. Container ships, bulk carriers, oil tankers - all should be steaming fully laden between China, Britain, Europe and the US, stocking camera shops, PC Worlds and Argos depots ahead of the retail pandemonium of 2009. But their water has been stolen.

They are a powerful and tangible representation of the hurricanes that have been wrought by the global economic crisis; an iron curtain drawn along the coastline of the southern edge of Malaysia's rural Johor state, 50 miles east of Singapore harbour...

...t is so far off the beaten track that nobody ever really comes close, which is why these ships are here. The world's ship owners and government economists would prefer you not to see this symbol of the depths of the plague still crippling the world's economies.

So they have been quietly retired to this equatorial backwater, to be maintained only by a handful of bored sailors. The skeleton crews are left alone to fend off the ever-present threats of piracy and collisions in the congested waters as the hulls gather rust and seaweed at what should be their busiest time of year. 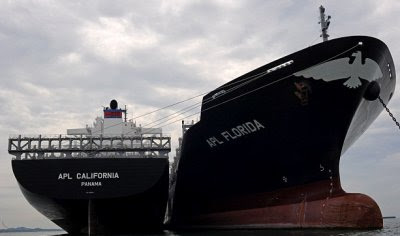 ...The Aframax-class oil tanker is the camel of the world's high seas. By definition, it is smaller than 132,000 tons deadweight and with a breadth above 106ft. It is used in the basins of the Black Sea, the North Sea, the Caribbean Sea, the China Sea and the Mediterranean - or anywhere where non-OPEC exporting countries have harbours and canals too small to accommodate very large crude carriers (VLCC) or ultra-large crude carriers (ULCCs). The term is based on the Average Freight Rate Assessment (AFRA) tanker rate system and is an industry standard.
A couple of years ago these ships would be steaming back and forth. Now 12 per cent are doing nothing 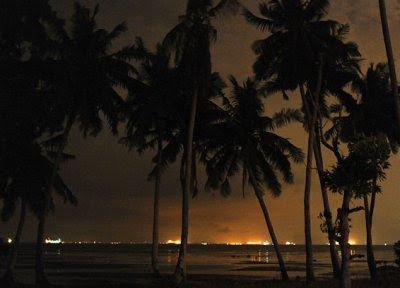 ...Aframaxes are oil bearers. But the slump is industry-wide. The cost of sending a 40ft steel container of merchandise from China to the UK has fallen from £850 plus fuel charges last year to £180 this year. The cost of chartering an entire bulk freighter suitable for carrying raw materials has plunged even further, from close to £185,000 ($300,000) last summer to an incredible £6,100 ($10,000) earlier this year.

...South Korean shipyard Hanjin Heavy Industries last week said it had been forced to put up for sale three container ships ordered at a cost of £60 million ($100 million) by the Iranian state shipping line after the Iranians said they could not pay the bill.

'The prospects for shipyards are bleak, particularly for the South Koreans, where they have a high proportion of foreign orders. Whole communities in places like Mokpo and Ulsan are involved in shipbuilding and there is a lot of sub-contracting to local companies,' Wallis says.

'So far the shipyards are continuing to work, but the problems will start to emerge next year and certainly in 2011, because that is when the current orders will have been delivered. There have hardly been any new orders in the past year. In 2011, the shipyards will simply run out of ships to build...'

The only green shoots I see are the tendrils of dry rot.