Bruce Bartlett is a Republican economist who served in the Reagan and Bush 41 administrations. While his history is that of a supply-sider, his recent writings -- including a column for this month's Forbes ("Fiscal Responsibility Requires Higher Taxes") -- indicate Bartlett has fully detached himself from reality.

Even with the economy flat on its back, Bartlett advocates raising taxes. What Bartlett fails to take into account, like so many misguided souls, is that economics is not a zero-sum game. Consider the following chart that compares historical tax rates to federal revenues as a percentage of GDP: 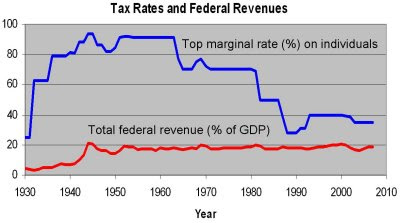 Barlett also gives currency to the preposterous notion of a Clinton-inspired economic boom.

During Bill Clinton's administration, Democratic economists got religion on deficits. They believe that his 1993 tax increase sparked an economic boom.

Bartlett and the "Democrat economists" assert that some sort of magical policy measure, orchestrated by Bill Clinton, resulted in huge value creation and attendant economic growth. These pundits -- and many others -- have forgotten two tiny, inconsequential drivers of the stock market during the Clinton years:

The web was released as a free service by the CERN research facility in 1993. Out of this technology arose trillions in market capitalization (even today, after the end of the tech and real estate booms). Companies like eBay, Google, Yahoo, and Amazon emerged, transforming global commerce.

Second, another immense boost to the economy was delivered by the "Year 2000" computer remediation effort (or "Y2K"). A huge repair investment -- estimated at between $300 billion to $500 billion -- occurred in the late nineties as governments and companies rushed to make their computer systems "Y2K-compliant." Either way, the tech boom would have happened.

Everyone knows that fiscal discipline must be restored eventually, or we will face truly horrifying consequences--defaulting on the debt, nonpayment of Social Security benefits, a collapsing dollar, and double-digit inflation and interest rates. Everyone also knows that this will involve a combination of higher revenues and lower spending. The idea that we can restore fiscal health only with spending cuts is childish...

Cutting hundreds of billions in outlays can be accomplished easily. There is no need for HUD. For the Departments of Education, Labor, Commerce, the EPA and a myriad of other bureaucracies that arose in the wake of the New Deal and Carter-era radicalism.

Reducing taxes increases risk-taking, entrepreneurship and innovation. It promotes capitalism and free trade. It spurs hiring, grows new industries from whole cloth and improves the quality of life for all.

Reducing taxes while slashing spending on needless bureaucracies is a necessity for the country's economic health. It's a pity that a former Reagan-ite like Bartlett seems to have forgotten this crucial lesson.