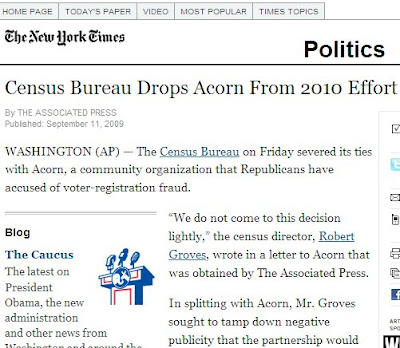 With word that the Census Bureau cuts its ties to ACORN, The New York Times was finally forced to report on events resulting from a stunning expose involving illegal immigration, child prostitution, smuggling rings and tax fraud. But, with its typical disdain for readers, the Times failed to report why the Census Bureau had fired ACORN.

The Census Bureau on Friday severed its ties with Acorn, a community organization that Republicans have accused of voter-registration fraud...

Stephen Buckner, a bureau spokesman, confirmed the letter, but declined to comment further... Scott Levenson, an Acorn spokesman, did not immediately respond to a request for comment... Republicans had become increasingly critical of the bureau’s ties with Acorn.

Some members of the group, which conducted an extensive voter registration effort last year, were accused of submitting false registration forms with names like Mickey Mouse. 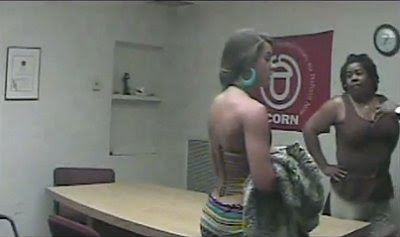 The scenario we posed the ACORN Housing employees in Baltimore is due to the application of similar power tactics. We gave ACORN a taste of its own medicine. ACORN was alleged to be thug-like, criminal, and nefarious. This criminal behavior was evidenced by a video of Baltimore ACORN community organizers breaking the locks on foreclosed homes. Instead of railing against their radicalism, it is best to bring out this type of radicalism. Hannah Giles and I took advantage of ACORN’s regard for thug criminality by posing the most ridiculous criminal scenario we could think of and seeing if they would comply–which they did without hesitation.

Additionally, instead of focusing on foreclosure itself, which has become seemingly as politicized as abortion, we focused on crimes more difficult for the left to defend: trafficking of young helpless girls and tax evasion. The first group represents the severely disadvantaged, the second a threat to the distribution of wealth.

...These tactics allow the viewer to see ACORN’s soul; their playing field and their morality, out in the open. Their system is based on conflict and change for its own sake. This system is based on totalitarian principles and class war techniques. These people understand pressure, power and self-interest. When the Baltimore employees saw we were shady dealers, their instincts clicked in, as we were prime recruits.

Which leads to some very sobering questions:

If you're a Times reader, you'd have missed every one of these points because of Bill Keller's willful deception.

Boycott The New York Times. Completely. I don't care if you get it for the Sports section or just the Sunday Edition. You'll make do without. And you'll also get the real news, whether you choose another paper or simply use the Internet.

Cancel your subscription now: call 1-800-NYTIMES (1-800-698-4637) and tell them to stop billing you. Remember not to cancel your friends and neighbors' subscriptions, because that would be deceptive.

Linked by: American Thinker. Thanks!