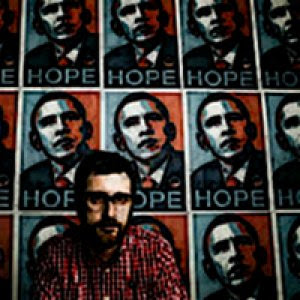 On August 10th, the National Endowment for the Arts, the White House Office of Public Engagement, and the Corporation for National and Community Service hosted a conference call with a handpicked arts group. This arts group played a key role in Obama’s arts effort during his election campaign, as declared by the organizers of the call, and many on the call played a role in the now famous Obama Hope poster.

Much of the talk on the conference call was a build up to what the National Endowment for the Arts (NEA) was specifically asking of this group. In the following segment, Buffy Wicks, Deputy Director of the White House Office of Public Engagement, clearly identifies this arts group as a pro-Obama collective and warns them of some “specific asks” that will be delivered later in the meeting.

...Later in the call, “specific asks” were delivered by Yosi Sergant, then Communications Director of the National Endowment for the Arts. What were the "asks"? They were for this pro-Obama arts group to create art on several hotly debated political issues, including health care...

...Setting up a propaganda machine is a dangerous precedent. The creation of a machine to address any issues, even ones with noble intentions, can be wielded by the state to create a climate amenable to the policies of those in power. Does anyone believe that once these artists are in place and we move to the election cycle, that the art they create will be bipartisan?

Is any of this legal? The use of White House employees to drive a purely partisan agenda?

Leveraging the NEA's taxpayer funds as a blunt weapon to force artists to create state-approved propaganda?

I'm no expert, but I suspect some big shoes have yet to drop.


Update: @Jim Geraghty: "The White House has no f'ing business making 'specific asks' of artists on an NEA-sponsored conference call."

Update II: John Nolte has an excellent analysis and quotes George Will: "“[T]he Obama administration is tightening the cinch on subsidized artists, conscripting them into the crusade to further politicize the 17 percent of the economy that is health care."

...the operation may well have been illegal. Public funds are not supposed to be expended to support partisan projects. Beyond that, it is unconstitutional to grant or deny federal funds on the basis of the recipient's political actions or opinions. National Endowment for the Arts v. Finley. The NEA is the single largest funder of the arts, and several participants in the August 10 conference call had recently received NEA checks. It would have been entirely reasonable for those on the phone call to conclude that future NEA funding could be influenced by their willingness to play ball with the Obama administration's political agenda. Moreover, the Hatch Act limits the ability of federal employees to engage in partisan politics. Sergant's sending of the email invitation to artists and arts groups, using his government email account, could be considered a bright line violation of the act, as could his apparent solicitation of political support from any arts group that had an application for funding pending before the NEA. Likewise, Ms. Wicks' participation in the call would appear to be illegal if she was "on duty" and if the call was deemed political in nature.

Don't hold your breath waiting for the Attorney General to investigate.