Five Questions for NBC and Jane Stone, regarding BlackBerry-Gate


In case you missed the NBC scandal that erupted last night, the following is a brief synopsis of the events, based upon reports filed at Big Government. 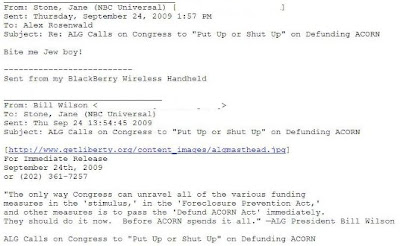 Step 2: Stone (or someone who had access to her BlackBerry) is alleged by ALG to have sent a four word reply to Rosenwald, namely, "Bite me, Jew Boy!"

Step 3: Writing in Politico, Michael Calderone relays a vehement denial from NBC News President Steve Capus, who said he was "outraged that this reckless organization would go out with such a defamatory, irresponsible statement... We have done a complete email analysis, all of our IT, all of our records."

Step 5: NBC hastily offered a caustic retort, stating that "Americans for Limited Government has chosen to launch an outrageous, reckless attack and smear campaign against an NBC News employee. Faced with irrefutable evidence that our employee did nothing more than ask to be removed from an email mailing list, the organization has maliciously published a fabricated email... Our employee never sent any such email... She is completely innocent of the outrageous charges and is being used by an organization to make a self-serving point..."

And that appears to be where we stand at the moment.

Several questions spring to mind, aimed at NBC management, which could be answered in minutes by their IT specialists:

1. Why has Ms. Stone not provided photographs of the BlackBerry showing her sent email?

Any one -- or, better yet, a combination of these would provide first-pass validation of NBC's position.

I'm sure Chris Matthews (host of Screwball on Screwball) and Keith "Strap On" Olbermann (host of Countdown to No Ratings) will fully investigate Stone-gate for their respective Monday broadcasts.