Four Marines Dead: Who Changed the Rules of Engagement?

We walked into a trap, a killing zone of relentless gunfire and rocket barrages from Afghan insurgents hidden in the mountainsides and in a fortress-like village where women and children were replenishing their ammunition.

"We will do to you what we did to the Russians," the insurgent's leader boasted over the radio, referring to the failure of Soviet troops to capture Ganjgal during the 1979-89 Soviet occupation...

It is a must-read, but I call particular attention to what happened during the ambush of Afghani soldiers and their Marine trainers outside of Ganjgal. 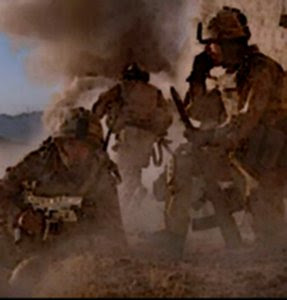 U.S. commanders, citing new rules to avoid civilian casualties, rejected repeated calls to unleash artillery rounds at attackers dug into the slopes and tree lines — despite being told repeatedly that they weren't near the village.

"We are pinned down. We are running low on ammo. We have no air. We've lost today," Marine Maj. Kevin Williams, 37, said through his translator to his Afghan counterpart, responding to the latter's repeated demands for helicopters.

Four U.S. Marines were killed Tuesday, the most U.S. service members assigned as trainers to the Afghan National Army to be lost in a single incident since the 2001 U.S.-led invasion... Three Americans and 19 Afghans were wounded...

Where is the outrage? What is this administration up to? Who called for these 'new rules' of engagement?

I just wish our pathetic mainstream media would stop operating as a government apparatchik and ask real questions of this administration.

How many more military personnel will die before someone asks this question of President Obama?


Linked by: Le·gal In·sur·rec·tion. Thanks!

at 11:01 AM
Email ThisBlogThis!Share to TwitterShare to FacebookShare to Pinterest
Labels: Obama, Protecting America, War