Is Sarkozy The New Thatcher?

Obama: "We must never stop until we see the day when nuclear arms have been banished from the face of the earth." 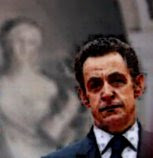 "President Obama dreams of a world without weapons … but right in front of us two countries are doing the exact opposite."

"I support the extended hand of the Americans, but what good has proposals for dialogue brought the international community? More uranium enrichment and declarations by the leaders of Iran to wipe a UN member state off the map," he continued, referring to Israel.

The sharp-tongued French leader even implied that Mr. Obama’s resolution 1887 had used up valuable diplomatic energy.

"If we have courage to impose sanctions together it will lend viability to our commitment to reduce our own weapons and to making a world without nuke weapons," he said.

Did you ever think you'd live to see the day when a French leader would lecture an American president on "courage"? Will Canada be the next to say "don't go wobbly on us, BHO"?


(Closely) Related: The WSJ noticed too. Today they comment here.