Israel has received two German U212 submarines ordered in 2005; delivery had been expected in 2010, Agence France-Presse reported Sept. 29, citing a military spokesman... 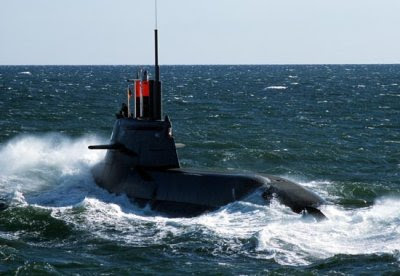 ...The submarines can launch cruise missiles with nuclear warheads, is designed to have 35 crew members and has a 4,500 kilometer-range (2,800 miles). Israel now has five German submarines.

Among its many countermeasures and defensive weaponry features, the U212 is capable of launching IDAS missiles from its torpedo tubes; the IDAS is used to suppress ASW (anti-submarine) helicopters.

at 7:38 PM
Email ThisBlogThis!Share to TwitterShare to FacebookShare to Pinterest
Labels: extremism, War