Feel a tingle yet? Q4 employment outlook is worst in decades


More than 28,000 interviews in 201 metro areas were used to create Manpower's U.S. Employment Outlook Survey for the fourth quarter of 2009.

The survey results depict an economy that is gasping for breath. Dazed companies are either frozen in fear or shedding staff in anticipation of the brilliant plans of the Democrats: sweeping new energy taxes (Cap-and-Trade); socialized medicine (with brutal mandates for small businesses); forced unionization (card check); and a reduction in consumer spending (with the expiration of the across-the-board Bush tax cuts). 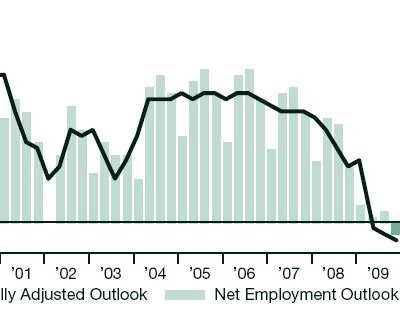 Despite the collectivist Utopia promised by the most radical leftist administration in decades; despite the $787 billion "Stimulus" package; despite the half-a-trillion dollar omnibus spending bill; despite the nationalization of the auto companies; despite the printing of trillions of dollars injected into a corrupt banking system; and despite dozens of similar programs I've forgotten about, the outlook is dark.

83% of employers surveyed expect to either decrease staff levels or keep them level. Only 12% expect to increase staff while 5% are undecided.

...the results suggest that employers expect a slight decrease in the rate of hiring when compared to Quarter 3 2009. The fourth quarter Net Employment Outlook for the U.S. is considerably weaker than one year ago at this time.

Consider that a year ago at this time we were suffering through "the worst financial crisis since the Great Depression". Yet, the outlook now is even weaker than it was then. So: are you feeling stimulated yet?

Employers across all regions anticipate a considerable decrease in hiring activity compared to one year ago.

Companies in every industry are in shock, awaiting a cascading series of new taxes, mandates, regulations and fees. 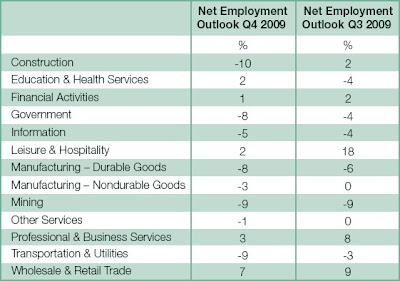 Each initiative is specifically designed by President Obama to repay the union bosses and trial lawyers for the millions of dollars they donated to his campaigns.

Each initiative is designed to steal your liberty and increase your reliance upon a faceless, nameless bureaucracy populated with hacks that can't be fired.

Each initiative is blatantly unconstitutional.

Not that Democrats give a damn about the Constitution. I just thought I'd mention it.


Linked by: InstaPundit, Al Fin and Ken Nelson. Thanks!