I was working on other stories at the time, but the questions - and answers - caught my ear, as Steve Kroft, the veteran correspondent for the CBS program "60 Minutes" was pressing Pelosi about some of her investments... Kroft is not a regular in the Capitol, so his presence and his questions certainly merit some attention...

Q: Madam Leader, I wanted to ask you why you and your husband back in March of 2008 accepted and participated in a very large IPO deal from Visa at a time there was major legislation affecting the credit card companies making its way through the House. Did you consider that to be a conflict of interest? 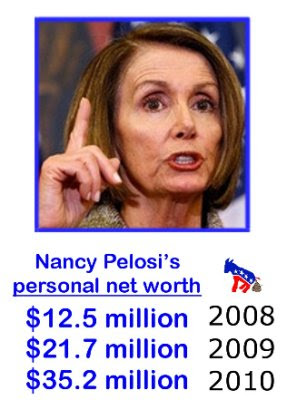 Leader Pelosi. I don't know what your point is of your question. Is there some point that you want to make with that?

Q: Well, I guess what I am asking is do you think it is all right for a Speaker to accept a very preferential, favorable stock deal?

Q: At a time when there is major legislation affecting that company in the House?

So the issue that you are talking about, first of all, what you are contending is not true. But second of all, we are very proud of our record of what happened.

Now, what Congressman or Senator Durbin was able to do in the Senate is quite remarkable, and when he was able to achieve that, then it was on this same issue, it was included by our Chairman Barney Frank in the bill.

Q: That was 2 years later though.

Leader Pelosi. But it was when we had a President who could sign the bill, and that is when we passed what Carolyn Maloney had. There was no interest on the part of President Bush to sign such a bill. But the fact is your basic premise is a false one, and it…

Q: I don't understand. Why is it false? You participated in the IPO.

Leader Pelosi. Well, I have many investments.

Q: You were Speaker of the House, and there was a bill very unfavorable to the credit card companies.

Leader Pelosi. Well, I will hold my record in fighting the credit card companies, as a Speaker of the House or as a Member of Congress, up against anyone. We had passed the Credit Cardholder Bill of Rights. I don't know what your point is. You like one bill better than another bill. No, this was the big powerful bill, and in fact we were able to achieve both once we were able to have a Democratic President. That is really all I am saying.

Leader Pelosi. No, it only has the appearance if you decide that you are going to elaborate on a false premise. But it is not true, and that is that.

Q: I don't understand what part is not true.

Leader Pelosi. That I would act upon an investment.

But I'm sure the curious confluence of events surrounding Pelosi's ascent to the Speakership while her bank accounts rapidly swelled were purely coincidental.