Of course, America's "journalists" are nowhere to be found. 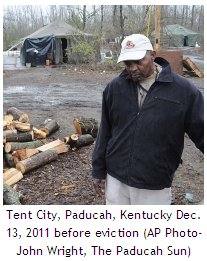 ...Just off the side of a motorway on the fringes of the picturesque town of Ann Arbor, Michigan, a mismatched collection of 30 tents tucked in the woods has become home - home to those who are either unemployed, or whose wages are so low that they can no longer afford to pay rent.

Conditions are unhygienic. There are no toilets and electricity is only available in the one communal tent where the campers huddle around a wood stove for warmth in the heart of winter... Ice weighs down the roofs of tents, and rain regularly drips onto the sleeping campers' faces.

Tent cities have sprung up in and around at least 55 American cities - they represent the bleak reality of America's poverty crisis... There are an estimated 5,000 people living in the dozens of camps that have sprung up across America.

...Unemployment in America today has not reached the astronomical levels of the 1930s, but barring a short spike in 1982, it has not been this high since the Depression era... There are now 13 million unemployed Americans, which is three million more than when President Barack Obama was first elected. ... The stark reality is that many of them are people who very recently lived comfortable middle-class lives.

The real unemployment rate is over 15 percent. Only through obvious, political skulduggery (like disappearing 1.2 million workers from the workforce in a single month) are the headline numbers reporting to be "improving".

And the media -- which is now indistinguishable from the Democrat Party -- laps it right up. And then wonder why their profession is dying.