The University of California at Davis: Upholding a Proud Tradition of Racism, Bigotry and Intolerance

What's the definition of 'fascism' again?

University of California-Davis has a disruptive group of Muslim brownshirts who take every chance they can to act in a disgusting manner to enforce the blasphemy laws under the sharia (restriction of free speech)... The campus police did nothing to stop their disruptions... 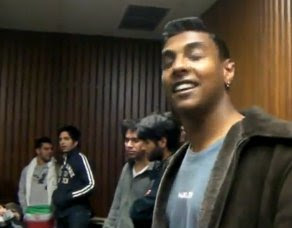 I am writing to complain about UCD Police behavior at an event at 7:00 pm in Room 106 of Wellman Hall last night (Monday, Feb 27, 2012). That event was a program featuring two Israelis talking about what they do in Israel (one was a soldier, one not).

From the outset of the program, hecklers interrupted the program making it impossible for the program to proceed. One particular heckler hurled epithets at the speakers preventing their exercise of free speech--and the ability of the audience to listen. I am including a link to a video made at the event so that you can hear for yourself what he said and how he said it...

After this had gone on for some time, I approached a police officer who was standing idly by and asked why he was there if not to ensure order--and why the heckler was not being removed. He specifically and absurdly responded to me: “We have been instructed by our superior not to stop hecklers, and if you try to stop the hecklers, we have been instructed to close down the program.”

Eventually, after some 15 or 20 minutes the heckler left and the program continued. Heckling to a lesser degree continued all the way through the question and answer period. That the police did nothing was frankly infuriating. I would appreciate your response.

Can you imagine a branch of the KKK behaving like this during a presentation celebrating Black History Month? No, only Christians and Jews can be targeted this way while a radical, leftist university administration and its police force look on.

Spread the news far and wide.

U.C. Davis is no friend to free speech. Or American values, for that matter.


P.S., Here are some official Twitter handles for the Davis and California university systems. Feel free to contact them -- politely, of course -- and ask them why they endorse racism, bigotry and intolerance.

Islamist animals. That's all they are.

These Fascists do this because they know they can get away with it. I think a better analogy would be what would happen if a Jewish student began heckling a Muslim speaker.

Aside from the audience perhaps beating the crap out of him/her, she would be condemned by every Jewish organization and probably expelled from school in shame. Clearly, she would be physically removed by the campus police.

Again, because they know they can get away with this garbage. In just about every university, the security guards (who are directed by the university administration) cowers in fear of Muslim violence. They do this for two reasons; one- they are anti-Israel bigots and, two - they are weak-kneed liberals.