These Democrats are obsessed with sex. Oh, and remember: there's nothing to cut from the bloated federal government.

Dr. Jay F. Kirkpatrick believes the key to wildlife population control isn't in culling out the existing population but in addressing its reproduction. 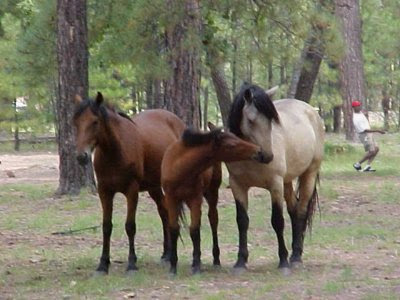 That's the approach the Science and Conservation Center has taken in its production of porcine zona pellucida (PZP), the active ingredient in a contraceptive vaccine approved on Thursday by the Environmental Protection Agency for use in horses. Kirkpatrick is one of three people who own and operate the local, nonprofit research laboratory.

Registered under the name ZonaStat-H, it is the first such vaccine approved and registered by the EPA, which recently took over regulatory authority for wildlife contraception, with the exception of zoos, from the U.S. Food and Drug Administration.

If I were the president for a day, I would cut the budgets of all of these useless bureaucracies by 95%. Why 95%? Because the remaining 5% is for the children.

guess horses remind them too much of humans...so time to get rid of them too!!!