And all this time, I thought that surging gas prices meant that the president was simply following through with his campaign promises.

Just when we thought that when it comes to nonsensical announcements Europe is second to none, here comes the White House and takes the cake:

WHITE HOUSE SAYS RISE IN GASOLINE PRICES CAUSED BY VARIETY OF GLOBAL FACTORS, INCLUDING UNREST IN SOME PARTS OF WORLD, FAST GROWTH IN OTHERS - RTRS

Uhm, would the "unrestful" parts of the world be those that have an above average US drone presence. At least we know that said price surges have nothing to do with the following chart:

As a reminder, we did note over the weekend that inflation is about to become the biggest concern of "investors" everywhere:

Rising U.S. gas prices have been fueled by a number of factors in world markets, including unrest and rapid growth in emerging markets, the White House said on Tuesday.

White House spokesman Jay Carney said recent increases in gasoline prices were "clearly the effect of a variety of factors on the global price of oil," including unrest in some parts of the world and economic growth in countries including India and China.

"The fact that this is happening only underscores the need ... to have a comprehensive energy policy," Carney told reporters...

The most hilarious part?

Baghdad Bob Carney claims that President Obama didn't put the kibosh on the Keystone XL pipeline... the Republicans did. 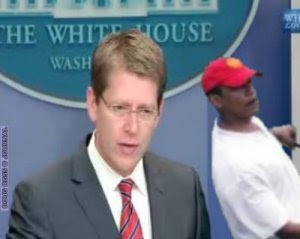 The fun begins at 4:30 of the clip. Carney’s playing a game here by stressing the weak distinction between canceling the pipeline project outright and “merely” postponing a decision on it until after the election so that environmentalists will keep donating to the Unicorn Prince. The State Department announced the postponement back in November — with the approval of Obama’s pals in the green lobby. Remember?

...Essentially Carney wants you to believe that if Obama’s environmentalist allies had told him the postponement was unacceptable, O would have shrugged and said, “Oh well. State’s gotta do what State’s gotta do.” What ended up happening was that, after the decision was postponed, the House GOP squeezed Democrats on the payroll-tax extension until they agreed to include a provision requiring the White House to make a firm decision on the pipeline within 60 days. O’s decision, of course, was to cancel it, ostensibly because “the arbitrary nature of the deadline” left State with little time to consider greener pipeline routers but in reality because he’s not about to alienate a core constituency in the middle of the campaign money war to end all campaign money wars. Not even the NYT op-ed page is willing to spin this crap for him. But then, they don’t get paid to. Well, not by the White House, I mean. I think.

Somewhere, Richard Nixon is smiling like the Cheshire Cat. He looks like Honest Abe Lincoln compared to this egregious crew.

I've looked, and the parallels are downright terrifying.